SHANGHAI, Aug. 1, 2022 /PRNewswire/ — Shanghai Electric announced this International Friendship Day that the firm will continue its unremitting efforts to promote Sino-Pakistani friendship and contribute to local communities in Pakistan. 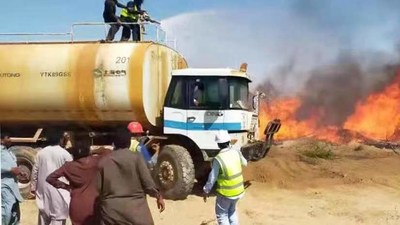 On March 28th, a fire broke out in the remote Varwai village in Islamkot Tharparkar district in Sindh province, Pakistan. Due to the dry climate of the region, the fire instantly spread throughout the whole village. However, the fire-fighting facilities in the remote village were quite limited. 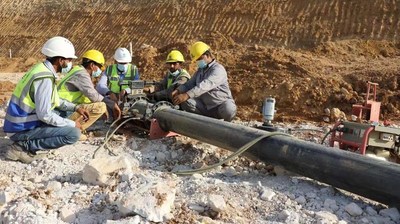 Shanghai Electric’s Thar coal mine and Thar power plants in Pakistan are not far from the village. Upon learning about the fire, the project team activated their fire emergency rescue plan, setting up a temporary fire rescue command, giving emergency rescue instructions and organizing fire trucks and firefighters who rushed to the scene of the fire.

They helped 38 families and 86 houses through the ordeal. In addition, the company also offered technical and safety education and training programs, Chinese language and other classes in practical matters for local employees, in an effort to upskill members of the local communities, as well as facilitate cultural exchanges and deepen the friendship between the two countries.

The team made a quick study of the fire situation, which led to finalizing the best rescue plan – getting water from nearby draining wells and quickly transporting it to the affected village with 50-cubic-meter sprinkler trucks. After solving the problem of the water supply, they sought to cut off the sources of combustible materials in and around the wood storage site to finally be able to put out the blaze. As soon as the plan was confirmed, the project department of the Thar coal mine assembled the employees, and dispatched 6 sprinklers, 4 loaders and 52 rescuers to support the firefighting effort.

As the fire was more severe than expected, the department immediately sent a request for reinforcements to the Thar power station project department, which dispatched two high-pressure fire trucks and an additional contingent of firefighters to the scene.

The focus was to save people’s lives first and protect property later, to reduce the possibility of human casualties. After more than 6 hours of arduous efforts, 38 families and 86 houses in the village were rescued without any casualties among the firefighters.

The firefighting effort is only a microcosm of Shanghai Electric’s commitment to fulfilling their social responsibilities and serving local communities. Since the launch of the Thar coal mine project and Thar power station project, Shanghai Electric has organized various public service activities to benefit the local populace.

The company has provided financial and material resources, as well as engineers and technicians, locally as part of the overall plan to supply guidance to Pakistani employees for best practices when undertaking construction projects. To overcome language barriers and the restrictions at and around the construction site, they trained the locals on-site and in person, with the aim of creating a team of highly qualified Pakistani professionals.

The company provided a series of education and training programs, including safety education and training on safe operations of construction equipment for civil engineering, on basic electrical insTharlations and on operations and construction rules. These efforts have not only contributed to the bettering of the local communities, but have also laid a solid foundation for the deepening friendship between China and Pakistan.