“Selective secularism is dangerous for the country,” says Director Vivek Agnihotri during CMFF-2022 at Chandigarh University

CHANDIGARH, India, May 17, 2022 /PRNewswire/ — “The Kashmir Files dared to show the truth of Kashmiri Hindu genocide which all the movies made on Kashmir had conveniently ignored,” said Director Vivek Agnihotri, as he hit out at the ‘prevalent selective secularism’ which, he said, was harming the country in a big way. 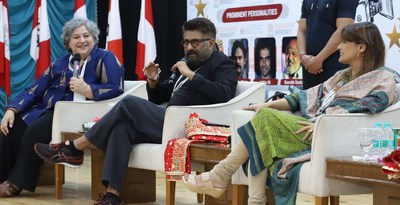 Speaking at the second edition of Chandigarh Music and Film Festival at Chandigarh University Gharuan, Agnihotri, director of ‘The Kashmir Files’, also said that Punjab has seen more bloodshed than any other region and the solution to the threat of terrorism was the strict policy of ‘zero tolerance to violence of any form’.

Agnihotri said that secularism was and is in the DNA of India, but ‘selective secularism’ that is prevalent in the country is not good for the nation.

“Secularism is a great thing, where all faiths should be given equal treatment and respect but in India, a dangerous trend of selective secularism is prevalent where politicians use the concept as per their convenience. I am against the selfish usage of secularism in politics, for vote bank. This is a threat to the spirit of the concept and will harm this great nation in a big way,” he said, adding that his movie ‘The Kashmir Files’ was being called Islamphobic by people, in the name of this ‘selective secularism’ only.

Agnihotri asserted that almost every part of the country has seen bloodshed at different points in time and unfortunately the countrymen didn’t stand for the victims at any time.

“The bloodshed fuelled by terrorism has occurred in Kashmir, in Jharkhand, in Bengal. Even the land of Punjab has seen more bloodshed than any other region for the longest period of time. The solution to the threat of terrorism was the strict policy of zero tolerance to violence of any form,” he said.

Speaking about ‘The Kashmir Files’, Agnihotri said that he started working on the movie in 2018, and has interviewed 700 Kashmiri Pandits on camera to find out the truth.

“Even today, our eyes get moist, on recounting each of those horrific accounts of the tragedy they went through. The Kashmir Files is the story of those people, put together and shown by me, to tell the truth that terrorism not only destroys the life, but also the culture and identity of even a community,” said an emotional Agnihotri.

Agnihotri said that The Kashmir Files was the second installment of the trilogy that began with The Tashkent Files, and The Delhi Files will be the third movie in the series. Ruing the lack of interest and spending on research in Bollywood, Agnihotri said that each of his films was akin to a full-blown research thesis, taking 3-4 years to complete, just like a PhD.

Earlier, renowned filmmaker and actor Saurabh Shukla spoke at length about the finer nuances of the acting, the layered structuring of the characters and the art of story-telling.

“Most important thing for an actor is his imagination and thus an actor must also write. The characters should be layered carefully, with each element peeled off by the audience on its own, instead of being put in open. Also, I believe that a story teller must understand himself what he is telling. If he does, I don’t see a reason why anyone else wouldn’t,” said the veteran actor while interacting with the students.

Actor Akhilendra Mishra shared with the students valuable tips and tricks on voice modulation and memory as an actor, while emphasising that language and pronunciation are the biggest asset for actors. Celebrated Director Abhishek Dudhaiya urged the students to put in hard work as they step up the ladders in the industry, saying, “the more hard work you put in behind the scenes, the closer you will get to the success on the screen.”

It may be mentioned here that the second edition of annual two-day-long Chandigarh Music And Film Festival (CMFF) culminated today at varsity campus, with renowned filmmakers and artists from Hindi film industry enlightening the audience with their insights into the art of filmmaking.

As many as 150 short films made by students of Film Schools were being screened during the Festival, which also witnessed Imtiaz Ali’s Talk Show and interaction with University Institute of Film and Media Studies giving a glimpse into finer nuances of filmmaking, current trends in the cinema industry as well as his journey in the Bollywood.

Xlear Teams Up With Dr. Ferrer BioPharma to Bring a Better User Experience to Nasal Hygiene