Sculptures of light draw the skies above the ancient UNESCO World heritage Site of Hegra in AlUla, the Majestic Desert City in Northwest Arabia

An impressive drawing of light made by drones, creating an illusion of light at Hegra’s Drone Light Show. The show took place in AlUla in the Northwest of Saudi Arabia on 13, 14, 15th of October 2022 to mark the end of AlUla Wellness Festival, the first of a series of festivals and events forming together AlUla Moments Calendar. Hegra’s Drone Show is brought by AlUla Moments and SKYMAGIC, produced by Balich Wonder Studio KSA, courtesy AlUla Moments. 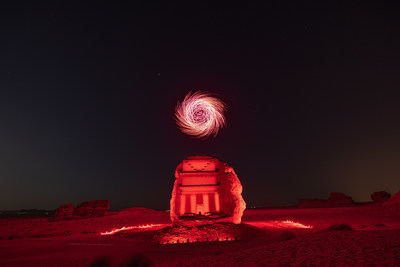 A drawing of a flying falcon above the Tomb of Lyhian Son of Kuza at Hegra, the first UNESCO World Heritage Site in the Kingdom of Saudi Arabia. Hegra’s Drone Light Show explores the origins and beauty of light in its purest form through a performative artwork at the intersection of technology where luminous drones will fly in the dark sky of AlUla to create a flying sculpture accompanied with music. Hegra’s Drone Show is brought by AlUla Moments and SKYMAGIC, produced by Balich Wonder Studio KSA, courtesy AlUla Moments. 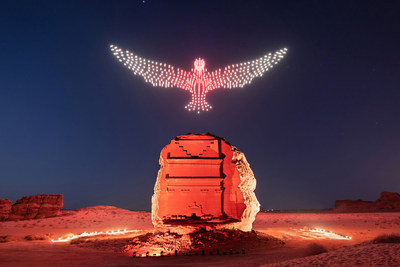 A celebration of light draws above Hegra, the UNESCO World Heritage Site in the Northwest of the Kingdom of Saudi Arabia. Hegra’s Drone Light Show explores the origins and beauty of light in its purest form. Light is the cornerstone of wellness, powering minds and bodies. The light show marks the end of AlUla Wellness Festival, which is the first of a series of festivals and events forming together AlUla Moments Calendar. Hegra’s Drone Show is brought by AlUla Moments and SKYMAGIC, produced by Balich Wonder Studio KSA, courtesy AlUla Moments. 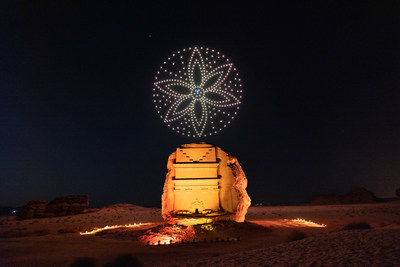 AlUla Moments is AlUla’s new home of events. The brand was launched at the end of 2021 and introduced four new festivals to celebrate and unlock AlUla’s stories, uncover its secrets and celebrate local and international cultures. With 7000 years of civilisations and home to some of the most sophisticated ancient Kingdoms of antiquity, AlUla is no stranger to social gathering and cultural celebrations.

The four festivals introduced were Winter at Tantora, which returned to celebrate heritage, culture and music, in addition to the AlUla Skies, AlUla Arts and AlUla Wellness Festival.

The festivals offered a selection of experiences in art, culture, music, nature, wellness, equestrian, food and astronomy. All of which were celebrating the culture, history and legacy of AlUla and the civilisations that once called the land of AlUla their home.

This year, AlUla Moments presents five Major festivals and five distinct events, including the return of Winter at Tantora and AlUla Wellness Festival, The return of AZIMUTH and for the first time The Ancient Kingdoms Festival will be introduced, to bring the past into the present with experiences inspired by the significance of 7000 years of successive civilisations on the Arabian Peninsula and the famed incense road trading route that cemented AlUla as the bustling commercial and cultural crossroad.

Located 1,100 km from Riyadh, in North-West Saudi Arabia, AlUla is a place of extraordinary natural and human heritage. The vast area, covering 22,561km², includes a lush oasis valley, towering sandstone mountains and ancient cultural heritage sites dating back thousands of years to when the Lihyan and Nabataean kingdoms reigned.

The most well-known and recognised site in AlUla is Hegra, Saudi Arabia’s first UNESCO World Heritage Site. A 52-hectare ancient city, Hegra was the principal southern city of the Nabataean Kingdom and is comprised of 111 well-preserved tombs, many with elaborate facades cut out of the sandstone outcrops surrounding the walled urban settlement.

Current research also suggests Hegra was the most southern outpost of the Roman Empire after the Roman’s conquered the Nabataeans in 106 CE.

In addition to Hegra, AlUla is also home to ancient Dadan, the capital of the Dadan and Lihyan Kingdoms and considered to be one of the most developed 1st millennium BCE cities of the Arabian Peninsula, and Jabal Ikmah, an open air library of hundreds of inscriptions and writings in many different languages. Also AlUla Old Town, a labyrinth of more than 900 mudbrick homes developed from at least the 12th century, and Hijaz Railway and Hegra Fort, key sites in the story and conquests of Lawrence of Arabia.

Connect with us on social media platforms: