RIYADH, Saudi Arabia, Oct. 28, 2019 /PRNewswire/ — As part of a move toward healthier citizens of the Kingdom and achieving the targets set in the Saudi Vision 2030, the Saudi Ministry of Health (MOH) under the leadership of HE the Minister Dr. Tawfig AlRabiah has successfully implemented several initiatives. 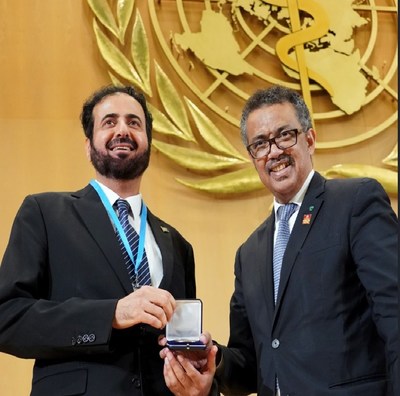 Saudi Arabia became one of the first countries to ratify World Health Organization (WHO) Framework Convention for Tobacco Control in 2005 and established the National Committee for Tobacco Control (NCTC). In 2017, the NCTC implemented the new 100% taxation on all tobacco products and enforced the no smoking law in public places including shopping malls, parks and workplaces. It has also banned tobacco advertisement and sponsorship and imposed Saudi regulations; restricting more than 60 types of imported products.

In 2018, the NCTC introduced an initiative in collaboration with the Interior Ministry focusing on prisons through raising awareness, treatment and facilitating smoke-free wings. It also collaborated with the Finance Ministry to raise the minimum price of tobacco products making it less accessible to the youngsters. Moreover, the Commerce Ministry has also established an electronic surveillance system that watches out for discount sales of tobacco products promotion in physical stores and in websites, penalizing violations.

Meanwhile, the MOH developed the Saudi clinical guidelines for tobacco cessation therapeutic program including the expansion of specialized clinics to 900 locations kingdomwide, ensuring easily accessible service and free medications to the needy. The MOH developed an electronic mobile application providing a wide variety of services to the public including awareness, prevention and treatment. The app also has a unique system for reporting violations of tobacco guidelines.

Collectively, these efforts resulted in a significant increase of clinic visits’ rates by 213% and decreased imports of tobacco products by 54% in 2019. The percentage of individuals quitting smoking has reached 307%.

Furthermore, the NCTC collaborated with The University of Massachusetts in the field of research on tobacco. It also conducted the Global Adult Tobacco Survey in 12,800 households Kingdomwide in collaboration with WHO and the Center for Disease Control and Prevention CDC in Atlanta, which was used to collect national data on adult tobacco usage in KSA.

In close collaboration with WHO, Saudi Arabia became the first country in the Middle East applying plain packaging for tobacco products effective August 2019. Whereas the WHO has bestowed a global recognition award to Dr. Tawfig AlRabiah (Saudi Health Minister) for his efforts in combating tobacco addiction in May 2019 during the 72nd World Health Assembly.

“Saudi Arabia has an ambitious strategic tobacco control plan to reduce smoking rates from 12.7% to 5% by 2030, and we are aiming to implement tobacco control programs targeting school students soon,” explains AlRabiah.