– Official cultural visit by Saudi Arabia to France features a series of successful strategic engagements, including meetings with the French Minister of Culture and the Director-General of UNESCO

– A new agreement signed with UNESCO further recognizes the cultural significance of ancient AlUla, building on existing cooperation between France and Saudi Arabia to enhance the destination. 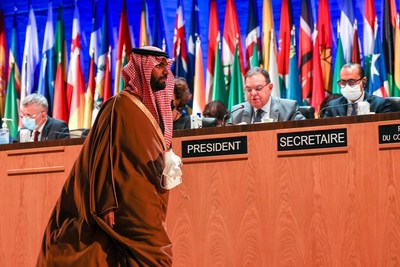 Prince Badr addressed the UNESCO General Conference: “We congratulate UNESCO on its seventy-fifth anniversary, which the Kingdom has been a part of since the beginning as a founder member. Saudi Arabia is committed to working with UNESCO, and its members, in the efforts to unleash the power of culture.”

The day prior UNESCO and the Royal Commission for AlUla signed an agreement that will help preserve the globally significant area, enabling it to become a destination for heritage, nature, arts, and culture. It builds on an existing partnership, through which over 100 French archaeologists and experts are currently working onsite.

France and Saudi have a long history of ongoing cultural exchange. For example, fifty years ago King Khalid helped establish the Arab World Institute in Paris. In 2018, HRH Crown Prince Mohammed bin Salman Al Saud made an official visit to France, meeting with President Emmanuel Macron, where a significant cultural agreement between the two countries was signed.

Purvanchal Expressway- gateway to development of Eastern UP