OTTAWA, Ontario, Sept. 2, 2020 /PRNewswire/ — The Royal Canadian Mint is proud to launch a $2 circulation coin celebrating the 75th anniversary of the end of the Second World War and the Canadians who defeated enemies of freedom after six long years of service on the battlefield and on the home front. Symbolic of that heroic accomplishment, a “V” for Victory figures prominently on this new commemorative coin unveiled today on the Mint’s YouTube channel. 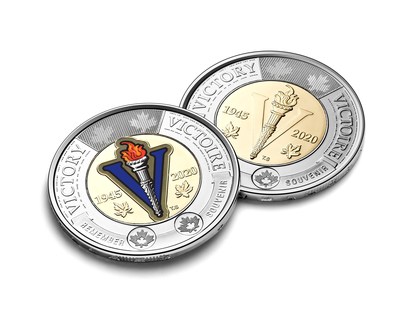 “For nearly six years, Canadians serving in uniform or chipping in at home played a vital role in achieving a hard-won peace,” said Lawrence MacAulay, Minister of Veterans Affairs and Associate Minister of National Defence. “The Royal Canadian Mint’s circulation coin issued on the 75th anniversary of the end of the Second World War is a fitting tribute to their legacy of bravery, of service, and of tremendous sacrifice. They have our enduring thanks, and I hope we can all live up to that legacy as this coin changes hands from one generation to the next.”

“The Royal Canadian Mint’s tradition of honouring our troops through coins goes all the way back to 1943, when Chief Engraver Thomas Shingles created the first Victory Nickel that called on all Canadians to work together to win the Second World War,” said Marie Lemay, the Mint’s President and CEO.  “Today, that inspirational message has found a new home on a special $2 commemorative circulation coin that is a proud 75th anniversary salute to every Canadian who played a role in ending this historic conflict.”

The $2 circulation coin commemorating the 75th anniversary of the end of the Second World War is inspired by the 1943-45 Victory Nickels designed by Thomas Shingles. The “V” for Victory on the inner core of the new toonie was, at the time, a rallying call to support the war effort from coast to coast to coast. The letter is overlaid with a flaming torch and flanked by maple leaves over the dates 1945 and 2020.

The words VICTORY and VICTOIRE appear on the outer ring, as does a message engraved in Morse code. “We win when we work willingly” and “La bonne volonté est gage de victoire” first appeared on wartime Victory Nickels. The obverse features the effigy of Her Majesty Queen Elizabeth, designed by Canadian artist Susanna Blunt in 2003.

Limited to a mintage of three million coins, two million will feature colour. The new $2 coin is now entering general circulation. Canadians will find it in their change as bank branches and businesses replenish their inventories of $2 coins.

Veterans of the Second World War, residing at the Perley and Rideau Veterans’ Health Centre in Ottawa, also shared their thoughts on the 75th anniversary of the end of hostilities:

Betty Bell (Royal Canadian Air Force, Women’s Division, Air Woman Grade 1)
“I was in London, England, when victory was declared and the city erupted in one huge celebration.  The crowd danced and sang in the streets of Piccadilly and Trafalgar Square.  Servicemen were sitting on top of lamp posts above the cheering crowd.  Victory had been won at a price, but now Europe was free and the lights were on again.  No more blackout, no more bombs.”

John A. Commerford (Canadian Army, Artillery Gunner)
“I felt a great sense of relief and appreciation for still being alive.”

The Mint is adding to this historic commemoration by offering related collector products.  There are 15,000 coloured and 5,000 uncoloured limited-edition special wrap rolls of 25 uncirculated coins each, retailing for $79.95. Customers may also purchase a collector keepsake set featuring both versions of the commemorative circulation coin, packaged with uncirculated versions of our 2020 classic circulation coins (5-cent to $1).  It retails for $22.95 and its mintage is set at 100,000.

These collectibles may be ordered as of today by contacting the Mint at 1-800-267-1871 in Canada, 1-800-268-6468 in the US, or online at www.mint.ca/victory.They are also available at the Royal Canadian Mint’s Winnipeg boutique, as well as through the Mint’s global network of dealers and distributors, including participating Canada Post outlets.

About the Royal Canadian Mint
The Royal Canadian Mint is the Crown corporation responsible for the minting and distribution of Canada’s circulation coins. The Mint is one of the largest and most versatile mints in the world, offering a wide range of specialized, high quality coinage products and related services on an international scale. For more information on the Mint, its products and services, visit www.mint.ca.  Follow the Mint on Twitter, Facebook and Instagram.

Images of the circulation coin and collector products are available here.