RIYADH, Saudi Arabia, Oct. 22, 2022 /PRNewswire/ — Riyadh Season 2022 kicked off yesterday, Friday, October 21 in the Saudi capital, Riyadh. Turki Alalshikh, Chairman of the Saudi General Entertainment Authority, launched Riyadh Season 2022 on Friday, October 21, with a spectacular display of drones, which set a new Guinness World Record for the most remote operated multirotor/drones launching fireworks simultaneously, through 548 drones that lit up the sky of the Saudi capital. It was followed by a Cirque du Soleil show, and an international concert by the British singer Anne-Marie, who performed in front of hundreds of thousands of fans. There was also an artistic presentation of the 15 entertainment zones of the season, as well as performances paving the way for their launch. 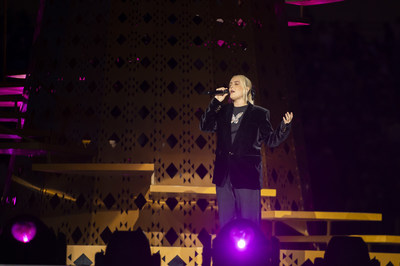 Riyadh Season 2022 offers a mixture of exclusivity and modernity, amid an abundance of entertainment that has made Riyadh a favorite destination for residents and visitors of the Kingdom. It contains 15 diverse entertainment zones, in addition to sporting events such as WWE and Riyadh Season Cup, which brings together Paris Saint-Germain team with the stars of Al-Hilal and Al-Nasr football clubs. There are also 65 days of fireworks, 17 Arabic plays, more than 150 musical events, local and international exhibitions in the fields of anime, perfumes and games, and a variety of events for families, individuals and children.

New zones have been added to Riyadh Season this year that attract visitors with their exceptional and exciting experiences, including Boulevard World zone, which showcases the experiences and cultures of 10 different countries and includes the largest man-made lake in the world, where visitors can enjoy riding submarines for the first time in Riyadh. Visitors can also enjoy many special events, such as the Combat Village, Super Hero Village, and the largest Sphere in the world. Cable cars will transport visitors between Boulevard World and the neighboring Boulevard Riyadh City (BLVD RUH City), with a capacity of 3,000 visitors per hour.+