HYDERABAD, India, Dec. 16, 2019 /PRNewswire/ — The Kaleshwaram Lift Irrigation Project (KLIP) created a record by lifting more than 25 TMC of water from Godavari river to Mid-Manair reservoir in less time compared to the world’s popular Handri-Neeva, Colorado and Great Manmade river projects. The whole world is now able to see the magnificent achievement of lifting Godavari water and enabling the reverse flow to the upper stream against the gravity. Once thought of as an impossible task has now become a visual reality. Nowhere in the world, such an effort is made as in Telangana where the river water is lifted to 300 meters above the sea level; this electro-mechanical engineering effort has already got worldwide recognition. 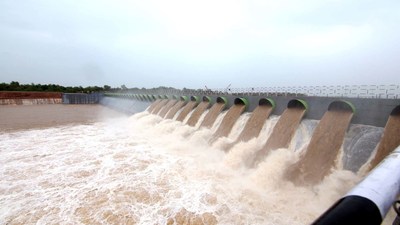 In the history of Indian irrigation sector, the projects like Nagarjuna Sagar, Sri Ram Sagar, Srisailam Left- Right canals, Telugu Ganga took decades to complete and some of them have not yet reached their full potential. With much more complex works than these projects, MEIL could complete Kaleshwaram Project within three years of its initiation, with a lifting capacity of 2 TMCs of water per day. All the credit for this engineering marvel goes to Megha Engineering Infrastructure Limited (MEIL). It is an enormous effort, be it in establishing a sophisticated electro-mechanical system or in completing the complex underground technical and electrical works within three years.

Commenting on this achievement Mr B Srinivasreddy, Director, MEIL said that “Even though technically Kaleshwaram Project was inaugurated on June 21, 2019, by three Chief Ministers of Telangana, Maharashtra and Andhra Pradesh, the technical feasibility of lifting water has experimented at Medigadda pumphouse even before. All the critical works of the Project have been now completed, enabling to lift nearly 25 TMCs of water within a short period; the water has now reached Mid Maneru Reservoir located near Siricilla District that is almost 300 meters above from the sea level.  Handri-Neeva Project considered as the biggest lift scheme in Asia could lift only 18 TMCs of water by continuous pumping throughout the year, whereas Kaleshwaram could lift 25 TMCs in a single season with intermittent pumping hours.”

Unlike other lift irrigation schemes, KLIP has a unique engineering system. The pumping capacity of 2 TMCs of water per day, storing the water in an intermittent reservoir and again lifting water from those reservoirs are some of the critical features of this mega project. Even though Handri-Neeva project’s capacity is 40TMC, but it could never lift more than 20 TMCs in a year.

Kaleshwaram Project could pump 160 TMCs of water from Godavari River, having a pumping capacity of 2 TMCs per day. It has proven its mettle by lifting and pumping 25 TMCs of water within a short time in the experimental stage itself. MEIL has taken up all the critical works of this project including construction of Under-ground Pump House and establishing electrical distribution system. Medigadda-Lakshmi, Annaram-Saraswathi, Sundilla-Parvathi, Lakshmipur-Under-ground Gayathri Pump Houses are very critical in Link-1 and Link-2 for operationalizing this project. All these Pump Houses have been now brought into utilization successfully without any technical glitches, proving the mettle of irrigation experts of Telangana and the executive ability of companies like MEIL, BHEL, Andriz and Zailum etc.

Lakshmi Pump House has got utmost importance as it is the first one that enables the reverse flow of Godavari River at a higher level. It could lift 24.062 TMCs of water during the period in between 5th July to 6th December 2019 in just 3157 pumping hours. Utilization of all the 11 Pumps in this period is another hallmark achievement. The 6th Pump, inaugurated by 3 Chief Ministers in June, could work for 489 hours lifting 3.72 TMCs of water. Each of these pumps, with a capacity of 40 MW, could lift 0.00762 TMCs of water in an hour. It was operationalized to its full potential since 11th November.

MEIL has established 8 machines, each with a capacity of 40 MWs, in Saraswathi Pump House. They could lift 18.559 TMCs of water by working for 1782 hours during the time between 22nd July- 6th December. Started functioning to their full potential since 19th November, they could work for nearly 1312 hours and lifted 13.675 TMCs of water. 5th machine worked for 295 hours and lifted 3.080 TMCs of water.

Gayathri Pump House is the most critical one among all the pumphouses, as it is an underground pumphouse constructed 430 feet below the ground. Seven machines are there in this Pump House each with a capacity of 139 MW. Such gigantic pumping units are nowhere established for the first time in the world. The efforts of MEIL and BHEL are much laudable in establishing such huge pumping units below the ground. These 7 units have worked for 2602 hours so far and enabled reaching of 29.70 TMCs of water towards Mid Maneru Reservoir. Thus, for the first time, Mid-Manair reservoir is full of Godavari water bringing a new life to the entire area.

“The mega effort of MEIL in lifting water to such a height and diverting the flow of Godavari River is an abnormal phenomenon. In that sense it has re-written the age-old idiom in Telugu, ‘Neeru Pallaemerugu’ (water flow only towards low lying areas). With the determination of Telangana Chief Minister, K. Chandra Shekhar Rao and the meticulous execution of the Kaleshwaram Project by MEIL,Godavari River has now taken a new direction flowing 175 Kms in transit to reach the upper reaches against the gravity,” Mr B Srinivas Reddy explained. The entire river route from Medigadda to Siricilla, earlier used to be dry, now got a fresh lease of life with full of water. The storage of water in Lakshmi, Saraswathi, Parvathi, Sirpadasagar-Yellampalli, Sriramsagar flood canal and Mid-Manair reservoirs has brought much-needed cheer among the local people.

Megha Engineering and Infrastructures Ltd. (MEIL) established in 1989, is one of the fastest growing infra companies in India. Over the years, MEIL has constructed numerous structures like large civil constructions, oil and gas pipelines, pump houses, large water treatment plants, dams, reservoirs, power transmission lines, power generation units, tunnels – and all of them have an important role to play in improving the quality of life of the common man for many years into the foreseeable future.