NEW DELHI, Oct. 10, 2022 /PRNewswire/ — Tens of thousands attended the 100th Birth Anniversary of Jagadguru Shri Kripalu Ji Maharaj as celebrations continued until midnight on 9th October 2022.  Bhakti Dham, the birthplace of Jagadguru Shri Kripalu Ji Maharaj was filled with lights and love as devotees performed aarti and abhishek on a grand scale.  During the Grand Aarti, you could see diya lights fill up each portion of Bhakti Mandir and Shri Guru Dham.  At midnight, all danced to ‘Hari Bol’ and ‘Radhe Radhe Govinda’ as the whole of Bhakti Dham filled with great joy.  Jagadguru Shri Kripalu Ji Maharaj has given countless gifts to the world at large, including a priceless set of His teachings in written and audio/visual form.  His three Mandirs, Prem Mandir, Bhakti Mandir and Kirti Mandir are known worldwide for their extraordinary beauty.  His three hospitals have already helped over 5 million impoverished individuals and his school and college, Jagadguru Kripalu Parishat Education has given an education to over 60,000 impoverished girls, whose lives have changed for the better. 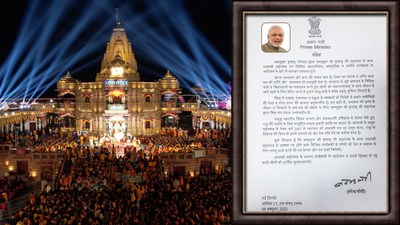 Dignitaries, including Prime Minister Narendra Modi ji, sent their messages of congratulations to the Presidents of Jagadguru Kripalu Parishat, H.H. Sushri Dr Vishakha Tripathi Ji, H.H. Sushri Dr. Shyama Tripathi Ji and H.H. Sushri Dr. Krishna Tripathi Ji, and the entire Jagadguru Kripalu Parishat Family on the auspicious occasion of the 100th Birth Anniversary of Jagadguru Shri Kripalu Ji Maharaj.  Prime Minister Modi, in his letter, said, “In order to weave the threads of unity, equality and brotherhood in the world, the prowess and  humanitarian efforts of the great saints of India is worth following. In this series, the exemplary works of Jagadguru Shri Kripalu Ji Maharaj to imbibe and connect people with the values and life of the Supreme Lord Shri Krishna is commendable and noteworthy”.

Jagadguru Kripalu Parishat received a multitude of congratulatory messages from many dignitaries, including Chief Minister of Uttar Pradesh, Yogi Adityanath ji, and many others, all expressing their joyful sentiments on this auspicious occasion.  Thousands of devotees also sent in their messages on how Jagadguru Shri Kripalu Ji Maharaj has inspired them to live better and to work towards a more peaceful and happy existence through the practice of Bhakti.  Many of these messages are shared on the Official Jagadguru Kripalu Parishat Youtube channels at youtube.com/jkpindia and facebook.com/jkpindia.

Jagadguru Shri Kripalu Ji Maharaj was born on the 5th of October 1922 on the auspicious occasion of Sharad Purnima. By the early 1940s, He started explaining the concepts of devotion through lectures by traveling to different parts of India to share His knowledge. In 1957, He was conferred the title of Jagadguru, by the Kashi Vidvat Parishat, a prestigious and exclusive body of 500 of the most revered Vedic scholars. He was only 34 years of age at the time. Since then He had worked tirelessly to spread the philosophy of the Vedas to the entire world. Masses would gather at the venues to get a glimpse of Him. Now His philosophy reaches millions through television and other online channels.