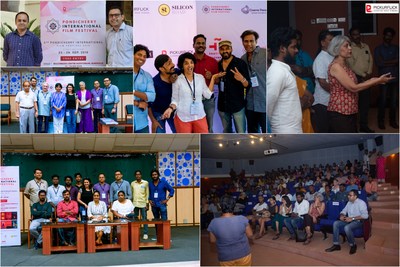 The weeklong film festival had screenings at Pondicherry University & Multimedia Centre Auditorium in association with Cinema Paradiso & Aurofilm. Film aficionados from Puducherry & nearby states thronged the screenings and got an opportunity to engage & interact with the film makers who presented their films at the festival.

Opening film Baaram (The Burden) by Priya Krishnaswamy received standing ovation and was attended by the entire cast & crew of the film. Popular actor Harish Uthaman attended the World Premiere of his Tamil film Ashvamithra directed by Puducherry based film maker Earthling Koushalya.

Actor Vijay Sethupathi’s film Seethakaathi had special screenings at both the venues and was attended by director Balaji Tharaneetharan, actress Gayathrie & the crew of the film. The cast & crew of Seethakaathi had a special interaction with the students from Pondicherry University.

India’s first documentary which traces the origin of Indian rock from the 1930s- Rockumentary: Evolution of Indian Rock which was presented by its director Abhimanyu Kukreja, won rave reviews.

“A platform for independent cinema is always welcome and the Pondicherry International Film Festival has taken this initiative forward by screening some fascinating shorts, documentaries and features. The Festival will in the years to come become one of the leaders in this endeavour,” shared the Jury Head Gautaman Bhaskaran in conclusion.

Commenting on the film festival, Founder & CEO of Pickurflick, Abhishek Sinha said, “We are genuinely pleased with the overall response that the 2nd edition of PIFF received and this also endorses the need for differentiated content which we are championing through Pickurflick.”

Co-founder & CBO, Arun Rathi said, “The success of PIFF 2019 further augments Pickurflick’s ecosystem of Indie filmmakers from across the globe. This ratification is vital for our omni channel distribution platform & is really encouraging for the independent cinema scene worldwide.”

We curate award-winning lndie cinema from across the globe & across formats which you won’t find on other platforms. Pickurflick is an omnichannel distribution platform with presence on web, TV and other diverse platforms. Currently it has a channel on Roku for North America and has a tie up with Qyou TV India.

Pickurflick is currently one of the fastest growing indie cinema platforms in India with an ecosystem of more than 15,000 film makers from across the globe. Inaugural edition of PIFF was held in September 2018 with 120+ film screenings across multiple venues.