ONCHAN, Isle of Man, May 10, 2019 /PRNewswire/ — PokerStars, the world’s largest poker company, made history last week when it dealt its 200 billionth hand. 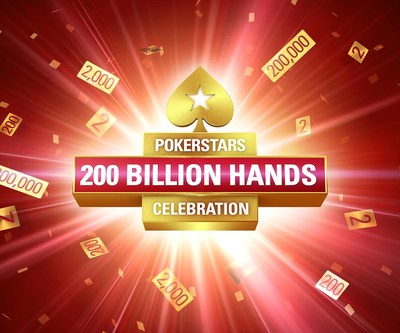 PokerStars has dealt more hands than any other online poker room. It dealt its first hand in 2001 and it has celebrated each major milestone ever since with huge cash pay outs to the players that made it all happen. PokerStars dealt its 100 billionth hand in June 2013, taking just six more years to double that figure.

Each of the six players dealt into the 200 billionth hand as they played an 8c/16c No Limit Hold’em cash game on May 4 was awarded $10,000. The pot was taken by player ‘KeySssi’.

PokerStars’ 200 Billion Poker Hands celebrations resulted in more than $2 million given back to the online poker community in the form of various promotions, including surprise Stars Rewards Chests, more than $400,000 in free tournament ticket drops, a $200,000 Mega Freeroll tournament, and free merchandise and random giveaways from the Stars Store. Players who have taken part in at least one hand of real-money poker on PokerStars in its history also earned a free spin of the 200 Billion Hands Celebration Wheel for a chance to win up to $2,000 each day, amongst other prizes. More than 6 million spins were awarded over the course of the celebrations.

“Two hundred billion is truly a stellar figure. It’s almost inconceivable,” said Séverin Rasset, Director of Poker Innovation and Operations at The Stars Group. “We’ve been looking forward to hitting this milestone for a long-time and it has been our privilege to put on weeks of celebrations to give back to every PokerStars player that has made this happen. Everyone here at Stars is very excited about this out of this world achievement. I’d like to congratulate you all. We can’t wait to celebrate the next milestone!”

About PokerStars
PokerStars operates the world’s most popular online poker sites, serving the global poker community. Since it launched in 2001, PokerStars has become the first choice of players all over the world, with more daily tournaments than anywhere else and with the best online security. More than 200 billion hands have been dealt on PokerStars, which is more than any other site.