ONCHAN, Isle of Man, May 5, 2020 /PRNewswire/ — On May 9 at 2pm ET, dozens of A-list celebrities will come together for Stars CALL for Action – Powered by PokerStars, an online charity poker event raising vital funds for relief efforts during the current global crisis. 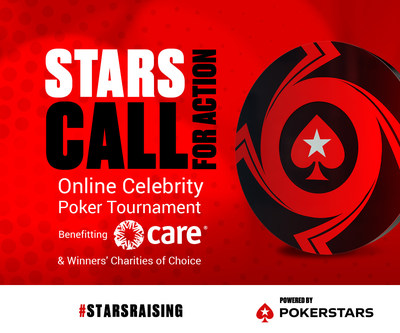 The online poker tournament will be hosted at PokerStars and broadcast live on Twitch, Facebook and YouTube. International stars will turn their cameras on as they take their seats at the virtual table, and poker lovers the world over can join hosts James Hartigan and Lex Veldhuis as they follow the action while dropping in on crowd favorites.

Viewers will also be able to contribute to the cause via a ‘Donate’ button on their platform of choice.

The top placed celebrities will direct their portions of $1 million, donated by PokerStars, to a charity of their choosing and take home exceptional bragging rights. Fifty percent of the total donation will go directly to Care International on behalf of those playing, as well as all proceeds donated via live stream. Grants to charities will be administered by the Entertainment Industry Foundation (EIF), a Charity Navigator Four-Star Charity that meets all 20 BBB Charity Standards.

“This event is a great way to combine genuine giving where it’s needed with a way to stay home and yet still connect with people from around the world. A friendly game of poker reminds us how life used to be, which hopefully we get back to soon,” said Hank Azaria. “It’s a way for people to interact for a good cause and enjoy themselves at the same time. The response has been really great, and I’ll tell you, when PokerStars stepped up like that, I was actually kind of moved by it. We were hoping they’d put in some money, but to basically finance the whole thing to the tune of a million dollars, is pretty incredible.”

To add a little extra competition, PokerStars is surprising players and fans by giving them the opportunity to play against the stars. PokerStars Ambassadors, Streamers and Celebrities will hold community giveaways and those chosen will battle it out on May 9 to direct further donations to Care International. Two fields – celebrities and players – will then play down to their respective final tables and combine for the ultimate showdown. Celebrities who get knocked out early will be added into a side event where the winner will direct 10% of the total to charity.

“This event began as a simple conversation between our team, Hank, Andy and the Entertainment Industry Foundation as a way to create positive entertainment and raise support for critical causes during these challenging times,” said Rebecca McAdam Willetts, Associate Director of Public Relations at PokerStars. “We were thrilled that they came to us and have been blown away by the momentum it’s gained. With people increasingly using our products to connect, compete and stay social while safe at home, we are delighted to show how the game we love can be used to bring people together and do good… with the added bonus of surprising some poker fans along the way.”

“We are honored to serve as a partner to artists in our community to help raise funds – and spirits – during this time,” said Regina Miller, Chief Strategy Advisor to the Entertainment Industry Foundation. “With PokerStars setting the stage and Hank and Andy leading the charge, we are looking forward to a fun-filled night of fundraising to benefit people across the world.”

To hear more from Hank Azaria and for further information check out the PokerStars Blog.

This event is a play money event, with no real money prizes awarded to any players. Donations will be made on the behalf of top performers.

Stars CALL for Action – Powered by PokerStars will be streamed at:

Care International UK is one of the world’s leading humanitarian charities and has been the official emergency relief partner of PokerStars since 2014. Care International works in over 100 countries around the world to save lives, defeat poverty and achieve social justice.

About the Entertainment Industry Foundation

The Entertainment Industry Foundation (EIF), founded in 1942, is a multifaceted organization that occupies a unique place in the world of philanthropy. By mobilizing and leveraging the powerful voice and creative talents of the entertainment industry, as well as cultivating the support of organizations (public and private) and philanthropists committed to social responsibility, EIF builds awareness and raises funds, developing and enhancing campaigns on the local, national and global level that facilitate positive social change. Visit eifoundation.org or follow @eifoundation for more information.