Poetry has the Power to Change and Transform: Naveen Patnaik at the 39th World Congress of Poets Inaugurated at KIIT 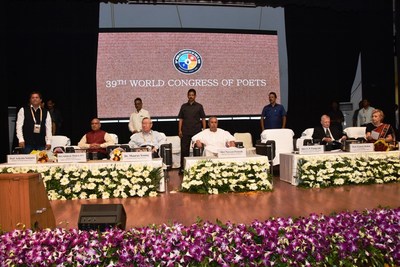 The 39th World Congress of Poets (WCP) has commenced in KIIT Deemed to be University from October 2, 2019, coinciding with the 150th Birth Anniversary of Mahatma Gandhi. More than 1000 poets, writers from 82 countries including India and 500 poets from Odisha attend the Congress. The theme of the 39th WCP is ‘Compassion through Poetry’ as its theme to commemorate the 150th Birth Anniversary of Bapu. This is the third time WCP is being hosted in India – on the previous two occasions, it was held in Chennai in 1986 and 2007. It is a matter of pride for Odisha and India to be hosting such a coveted Congress. Dr. Achyuta Samanta, Founder, KIIT & KISS and the President of 39th WCP took initiatives to bring this mega event to Odisha to promote the art, culture, heritage, literature, tradition and tourism of India and Odisha at an international level. He has taken all the steps to make it a grand and colorful event.

Poetry has the power to change, transform and bring in a better social order said, Naveen Patnaik, Chief Minister of Odisha on 2nd October 2019. Inaugurating the 39th World Congress of Poets (WCP) in KIIT he said, “India is celebrating the 150th Birth Anniversary of Mahatma Gandhi worldwide, the epitome of peace and non-violence. As the World Congress of Poets is all about the promotion of poetry as a natural and vital network connecting poets to the world’s need for cooperation and peace. Creativity coupled with peace and non-violence is taking new strides. Odisha is a land of cultural pluralism having a rich and enviable tradition of poetry. The worldview in the immortal lines of our 19th-century poet Bhima Bhoi in the UNO Headquarters, which is now illuminating and igniting million minds.”

Speaking on the occasion Akhilesh Mishra, Director General, Indian Council for Cultural Relations, Govt. of India said, “Poetry is the way to develop mutual understanding between us. Indian literature and poetry are very ancient. We can develop universal brotherhood and peace through poetry. Our Rigved is the ancient poetry of the world.”

Prof. Ernesto Kahan, the 1st Vice President, World Academy of Arts and Culture said, “WCP is increasing day by day in terms of quality and quantity. Its main motto is world brotherhood and peace through poetry. We can bring change in the world through poetry.”

Dr. Maurus Young, President, World Congress of Poets said, “India is the land of poetry. I have seen many WCPs, but this World Congress is unique and marvellous.”

The poets from 82 countries unveiled the statue of Mahatma Gandhi and pay tribute to the Mahatma early in the morning. They also inaugurated the public library Karamchand (Gandhi Library) and celebrated Gandhi Jayanti with the 27500 students of KISS.

Kalinga Institute of Industrial Technology (KIIT) was founded by Dr. Achyuta Samanta a multi-disciplinary University with current student strength of 25,000 from all corners of India and around 22 countries creating a mini metropolis. KIIT sprawls over a 25 sq.km area with one million square meters of aesthetically built up area. There are 28 constituent schools, contiguously located in impeccably landscaped and modern-technology enabled campuses offering graduate, post graduate, doctoral and post doctoral programmes in a wide range of disciplines. The institute’s solemn academic ambiance has led to grant of A category status to it by the Ministry of HRD, Govt of India. The university is not only accredited by NAAC in UGC but is amongst the few in India to receive a Tier 1 (Washington Accord) accreditation by NBA of AICTE for engineering streams.