ULAANBAATAR, Mongolia, Sept. 15, 2022 /PRNewswire/ — Mongolia’s Prime Minister, L. Oyun-Erdene, has met today with major Hollywood studios and film companies to discuss how they can work together to further develop and promote the Mongolian film industry internationally. 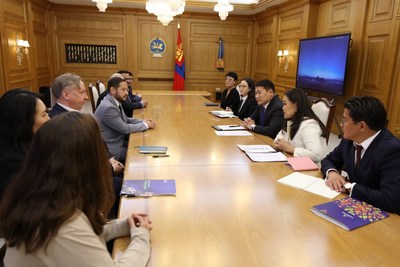 Attendees at the meeting included senior representatives from HBO, Netflix, Paramount Pictures and Warner Brothers, who are all in Ulaanbaatar at the invitation of Mongolia’s Culture Minister, Nomin Chinbat.

Opening the meeting, the Prime Minister outlined the Government’s efforts to develop Mongolia’s creative industries as part of strengthening and diversifying the country’s economy. Developing the creative industries is a key part of Mongolia’s New Recovery Policy and provides opportunities to create a new, independent source of growth away from mining.

The Prime Minister stressed the Government’s commitment to create a favourable filming environment in Mongolia to take its film industry to the next level. Mongolia’s Law on the Support of Cinematography was approved in 2021 and started to be implemented in early 2022.

The visit by the leading film executives coincides with “FAM TOUR-2022”, an initiative jointly organised by Mongolia’s Ministry of Culture and the Mongolian National Film Council to promote the incentives available for filming in Mongolia, as well as the activities of the Council and Mongolia’s beautiful natural environment. It is running from 14-19 September.

During the rest of their visit to Mongolia, which lasts until 19 September, the film executives will meet with Mongolian filmmakers, directors, producers and artists, including Nomadia Pictures and the world-class recording studio B Production. They will also visit the Mongol Nomadic Tourist Camp and see an equestrian stunt show at Terelj National Park.

“Mongolia’s creative industries have the potential to become a major pillar of our economy, and strengthening our partnership with these leading film companies is key to making progress in this area as part of our New Recovery Policy.

“I look forward to our work together in future and to seeing an increasing number of studios choosing to work in Mongolia in the years ahead, helping to put our film industry firmly on the map.”