Paradise Launches Fiery Biryani and Kebab for all Spice Lovers

HYDERABAD, India, July 22, 2022 /PRNewswire/ — One of the world’s favorite biryani restaurants, Paradise has added a brand new Biryani and Kebab to its existing list of authentic and popular Biryanis and Kebabs. The two new dishes viz. Fiery Chicken Biryani and Fiery Chicken Kebab are launched for those who love spicy food. Hyderabadis are known for their love for spicy foods hence Paradise dishes them out with a select signature spice mix, which is used in the correct proprietary ratios and methods of Paradise that make their biryani unique. This along with the slow and careful cooking add extra flavor to Paradise Dishes. 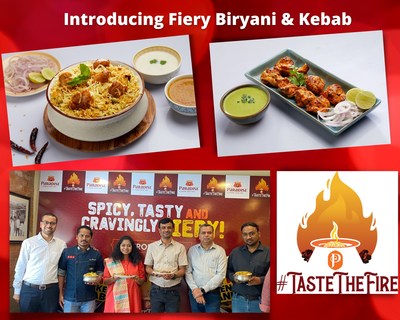 The two new dishes at Paradise are available at all the outlets across the country. Since the turn of the year, Paradise has added 16 more outlets to its numbers to bring its trademark biryani and other delicacies closer to people. Ample care is taken to prepare the food until dished out in line with the safety protocols and hygiene standards in the current times. Guests can be assured of both the taste and quality that Paradise has been keeping up for seven decades.

On the two new additions to the Paradise menu, Mr. Gautam Gupta, CEO – Paradise Food Court Pvt. Ltd. said, “We wanted to bring some newness to our menu, so we decided to come up with a new Biryani and Kebab. Besides, we realized from our loyal customer base that they had enjoyed the extra spices especially dished out during the Haleem season. Come monsoon and the fiery range of foods go well with the climate right now. Our spices are picked carefully and cooked gently to let the aroma infuse. We are sure the customers are going to love this fiery duo of Biryani and Kebab.”

“Hyderabadis love spicy food, so we thought why not give it a different touch from our regular menu. With monsoons in, our guests would love to dig into hot and spicier food than usual. There is a horde of people already lining up to taste the new recipe, and our new fiery combo is available on all channels Dine-in, Take away and Delivery,” Mr. Siddharth Arora, COO – Paradise Food Court Pvt. Ltd added.

Mr. Kushagra Gupta, Head of Marketing – Paradise Food Court Pvt. Ltd. said, “It is really exciting to announce two new dishes Fiery Biryani and Fiery Kebab. We will serve the new additions at all outlets and on online platforms. Most important thing is that this enhanced Spice level is done without adding any artificial item in the dish. Kudos to our research team for that.”

The food chain has acquired its place in the Limca Book of Records for ‘Most Biryanis Served in a Year’. In 2017, Paradise catered over 70 lakh servings of biryani and in 2018 the numbers crossed over 90 lakh. Paradise also won the ‘Restaurant Serving The Best Biryani’ award at the Asia Food Congress and Golden Spoon Award at the India Food Forum in 2018. Through the years, they have won several accolades and laurels from Telangana State Hotels Associations, GHMC, Times Food Award, Pride of Telangana, and Lifetime Achievement Award to name a few.

Paradise also has launched its own mobile app on Google Play and App store for Android and iOS users. Both Fiery Chicken Biryani and Fiery Kebabs are available on the Paradise Biryani app that gives faster delivery with some exclusive offers.

Back in 1953, a small Canteen and Café functioned out of a cinema theatre called Paradise in Secunderabad. The Café continued its services even when the theatre shut down. Between 1978 and 1996, the restaurant underwent an exhaustive re-structuring, renovation, and modernization program that was aimed at adapting to the changing social trends and evolving food habits of the people. Today, we have expanded to multiple locations across India by being flagbearers of authentic Hyderabadi biryani and have plans to take this Hyderabadi pride to the entire world.