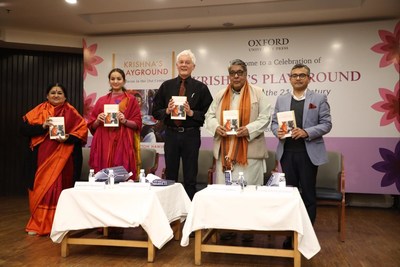 The event began with a musical rendition by Padma Shri awardee, Shubha Mudgal who was accompanied by tabla maestro and classical harmonium player Aneesh Pradhan and Sudhir Nayak respectively. The evening saw the celebration of this book and of Professor Hawley’s meticulous scholarship. This was followed by a brief presentation by the author and conversation and remarks on the books from eminent panelists including Ms. V. Mohini Giri – Chairperson, Guild of Service and Ma Dham Ashram; Mr. Rimpesh Sharma – Director, InGenious Studio and Vrindavan Chandrodaya Mandir; and Ms. Vishnupriya Goswami – Jai Singh Ghewra, Vrindavan.

This book is about a deeply beloved place – many call it the spiritual capital of India. Located at a dramatic bend in the River Yamuna, a hundred miles from the center of Delhi, Vrindavan is the spot where the god Krishna is believed to have spent his childhood and youth. For Hindus, it has always stood for youth writ large. Now, though, the world is gobbling up Vrindavan. Half the town is a vast real-estate development – and the waters of the Yamuna are too polluted to drink or even bathe in. Temples now style themselves as theme parks, and the world’s tallest religious building is under construction in Krishna’s pastoral paradise. Professor Hawley’s book is based on over forty years of visiting and working in Vrindavan, especially the last decade and a half, when it became clear that the town was being dramatically, perhaps irreversibly, transformed. His talk is structured, in part, as a walk through this startling new landscape, evoking questions about the town’s status as a heritage landmark.

John Stratton Hawley is Claire Tow Professor of Religion at Barnard College, Columbia University, USA. He has written or edited some twenty books on Hinduism, India’s bhakti traditions, and the comparative study of religion. These include A Storm of Songs: India and the Idea of the Bhakti Movement (Harvard, 2015), Sur’s Ocean (with Kenneth Bryant, Harvard, 2015), and a poem-by-poem commentary on the early Sursagar called Into Sur’s Ocean (Harvard Oriental Series, 2016). A Storm of Songs, which is available as a paperback in South Asia, received the Ananda Kentish Coomaraswamy book prize of the Association for Asian Studies in March 2017. Jack Hawley has directed Columbia University’s South Asia Institute and has received multiple awards from NEH, the Smithsonian, and the AIIS. He has been a Guggenheim Fellow and was recently elected to the American Academy of Arts and Sciences. In 2016-17 he has been in India as a Fulbright-Nehru Fellow, working on a project called ‘The New Vrindavan.’

Oxford University Press (OUP) is a department of the University of Oxford. It furthers the University’s objective of excellence in research, scholarship, and education by publishing worldwide. OUP is the world’s largest university press with the widest global presence. It publishes in many countries, in more than 40 languages, and in a variety of formats-print and digital. OUP products cover an extremely broad academic and educational spectrum, and OUP aims to make content available to users in a format that suits them best.

Established in 1912, OUP India has grown to be one of the largest publishers in the region, with a strong presence in India and the neighboring countries, including Nepal, Sri Lanka, and Bangladesh. Headquartered in New Delhi, it has regional offices in Delhi, Kolkata, Chennai, and Mumbai.

OUP India is committed to the continuous development of its publishing programs, covering both print and digital, to meet the growing and varying learning needs of students, teachers, scholars, and general readers in the region.