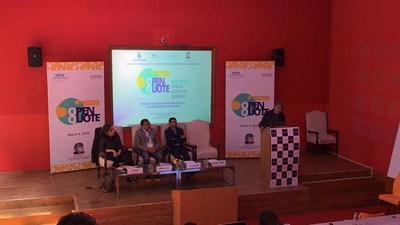 Religious diversity and pluralism is increasing all over the world, and globalization is creating a widespread awareness of that. The growing influence of religions in public politics and culture around the world is contradicting conventional narratives of secularization, and South Asia, which has the most astounding cultural and religious diversity, is no exception to this fact.

With an aim to address, introspect and redefine phrases like religion, secularism, and modernity and other socio-cultural matters, the conference reflected upon key issues including different cultural nuances and changing definition of religion in the modern day context; economical dimensions of religion; issues of religion, law and legality; representation of religion in popular culture amongst others.

Commenting on the theme and sessions, noted psychoanalyst with key focus on cultural psychology and the psychology of religion, Mr. Sudhir Kakar said, “Religion has acted as a major binding force in society by imbibing certain moral values, especially in South Asia where religion is a predominant force across all nations. Over the decades, religion has blended with politics in society and religious influence which has led to changing meanings and definitions of the concept. I would like to congratulate Oxford University Press for bringing critical topics on the table and hope to get meaningful discussions out of it and look forward to associations in the future as well.”

“At OUP, we are committed to meet the growing and varying learning needs of students, teachers, scholars and general readers. We are delighted to announce Open Quote and see the conference evolve as a platform that opens doors to address key issues concerning South Asia,” said Naveen Choudhary – Associate Director, Marketing, Oxford University Press (India).

Highlighting the significance of the sessions, Naveen added, “Future of any country rests on the educated and informed youth. Hence it is important to provide them deeper understanding of fundamentals, socio-economic and cultural aspects that govern any country. Through this conference, we seek to introspect and stimulate informed dialogue between the participants, thereby making fresh ideas available to the larger public, especially the young generation.”

Oxford University Press plans to host similar conferences across leading universities in the country on subject matters relevant to the South Asian market.

Oxford University Press (OUP) is a department of the University of Oxford. It furthers the University’s objective of excellence in research, scholarship, and education by publishing worldwide. OUP is the world’s largest university press with the widest global presence. It publishes in many countries, in more than 40 languages, and in a variety of formats-print and digital. OUP products cover an extremely broad academic and educational spectrum, and OUP aims to make content available to users in a format that suits them best.

Established in 1912, OUP India has grown to be one of the largest publishers in the region, with a strong presence in India and the neighbouring countries, including Nepal, Sri Lanka, and Bangladesh. Headquartered in New Delhi, it has regional offices in Delhi, Kolkata, Chennai, and Mumbai.

OUP India is committed to the continuous development of its publishing programs, covering both print and digital, to meet the growing and varying learning needs of students, teachers, scholars, and general readers in the region.