BENGALURU, March 10, 2020 /PRNewswire/ — Orion Mall at Brigade Gateway concluded the first ever edition of Wempower on 8th March, celebrated as International Women’s Day. Against the backdrop of rising crimes against women, with statistics from the National Crime Records Bureau India, reporting an increase in the rates, Wempower sought to address a multitude of issues pertinent to modern day feminism, such as women’s safety, single parenting, moral policing, female stereotypes and reclaiming individual identity. 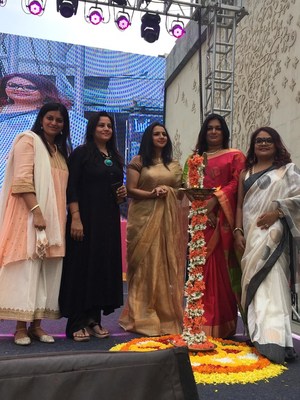 With Women’s Day mostly reduced to mere tokenism, amidst a bevy of discount vouchers and bumper sales, Wempower – the women’s day festival – aimed to reflect on celebrating acts of grit and courage by real life trailblazers from diverse domains who have dared to challenge and change the script and transform feminism into a more gender neutral and inclusively sustainable dialogue.

Acclaimed journalist, columnist on gender and sexuality and best-selling, feminist author Sreemoyee Piu Kundu was the curator of this festival. “The game changer in this festival were real life crusaders who walked their talk and not just so-called, Page three celebrities who are on magazine covers. The thrust of Wempower lay on its strong speakers. Explosive themes. Inspiring performances. And our belief that the fight of feminism is a human rights struggle,” added Kundu.

The festival begun with the ceremonial lighting of the lamp, accompanied by rousing key note speeches by Roopa D, the first lady Kannadiga IPS officer, currently serving as Inspector General of Police in Bengaluru, All India Mahila Congress, General-Secretary, celebrated journalist and transgender and child rights activist, Apsara Reddy and Sruthi Hariharan, leading Kannada film actress and producer, also the proud recipient of several accolades, including, the Karnataka State Film Award, three Filmfare Awards (South), a SIIMA award, and, a special mention at the 66th National film awards for her performance in Nathicharami.

Joining them on stage was Pavitra Shankar, Executive Director, Brigade Group. “From the very onset, we had a concrete vision of what we wanted this festival to be. The focus was placed on breaking the mould and scripting a different narrative. Conversations included all genders to bring about quantitative as well as qualitative changes and thought leadership. Using our influence as a leading brand that supports and values our female employees, we aspired that this festival become a platform and a convergence point for those who believe in equality, fairness and kindness for all,” added Shankar.

This was followed by an evocative dance performance by STEM (Space.Time.Energy. Movement) Dance Kampni, the performing wing of Natya Institute of Kathak and Choreography, helmed by Indian classical, contemporary dancer and choreographer, Madhu Nataraj.

The event featured three, riveting panel discussions based on the collective themes of women empowerment, gender diversity and equality. The first of which explored burning topics, such as, women’s safety, sexual abuse, moral policing, gender politics and patriarchy.

The panel comprised former civil servant, well-known advocate and social activist, Abha Singh, political satirist and leading stand-up comedian, Sanjay Rajoura, Sandhya Menon, the country’s top journalists, who was one of the first and most forceful voices of the #MeToo campaign, whose Twitter handle @TheRestlessQuil remains the go-to place for everything related to the #MeToo movement in India and Pragya Prasun Singh, acid attack survivor turned activist and social worker who’s has been ﬁghting for providing relief and rehabilitation to her fellow acid attack and burn survivors from past 6 years now. Pragya is also the founder and Secretary of ‘Atijeevan Foundation’, an NGO that apart from facilitating free of cost surgeries, also provides avenues for income generation to several acid attack and burn survivors by training them to create handicraft products.

The session was moderated by Shreya Krishnan.

The session was moderated by Dipika Trehan.

This was followed by a twenty minute stand-up comedy act by writer and disability rights activist, Pune-based, Sweta Mantrii who took to stand-up to have a conversation about her disability and the issues that come with it. Born with spinal bifida, Mantrii now finds people calling her ‘inspirational’.

The final panel was centred on why women are traditionally stereotyped according to the roles they are cast into, thanks to their limited gender identity, what it takes to shatter convention and why the tightrope of being a woman means taking on and tackling patriarchy, head on. Featuring Anita Ratnam, Indian classical, contemporary dancer, choreographer & arts entrepreneur, Vandana Suri, investment banker turned founder, Taxshe, and, Reeth Abraham, celebrated athlete from Bengaluru, India and former Asian medallist in long jump and 100 meters hurdles and a former national champion in heptathlon. Reeth won the Arjuna Award in 1997 and the Rajyotsava Award in 1983.

The session was moderated by Jacintha Jayachandran.

Setting an example in the space of Women’s Day celebrations, Wempower in its debut edition paved the way for diverse conversations around gender and building an inclusive society, built on the foundations of empathy, compassion and an all-round awareness.

A world-class mall in every facet, the iconic Orion Mall at Brigade Gateway is Brigade Group’s flagship mall venture and has won every accolade and prestigious award bestowed by the most recognised industry associations in India. This premium mall set high standards across construction, architecture, consumer experience, and marketing; and quickly established itself as the benchmark among its peers. Spread across 8.2 lakh square feet, with every detail of a rich modern retail environment woven in, Orion Mall at Brigade Gateway is a true game changer in the mall industry. For more information log on to www.orionmalls.com.