MUMBAI, India, Aug. 5, 2020 /PRNewswire/ — Singapore-based martial arts organization ONE Championship, with it’s core focus on revolutionizing the Mixed Martial Arts industry in Asia and to ramp up the sport in India, has broken into the Top 10 Most Engaging Sport Profiles on Facebook Worldwide, according to figures released by Socialbakers. The data was collected between 1 January and 30 June, 2020 by the global AI-powered social media marketing company that serves thousands of brands including over 100 companies on the list of Fortune Global 500. 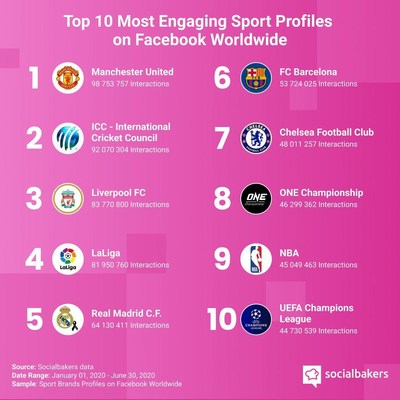 As the only Asian representative and martial arts property on the list, ONE secured the eighth spot overall, with 46,299,362 interactions, slightly edging out the National Basketball Association (NBA), which sits in the ninth spot at 45,049,463 interactions. The Top 10 is mostly dominated by football organizations, featuring some of the most high-profile sports properties in the world, including Manchester United, Liverpool FC, International Cricket Council (ICC), and LaLiga among others.

Commenting on the prestigious occasion, Hari Vijayarajan – CCO, ONE Championship – India said, “Being one of the youngest global sports media properties at only 9 years old, it gives us immense pride to be ranked #8 global sports media property (out of >5000) from January to June 2020 in terms of engagement on Facebook in the report released by Socialbakers. As more than 80% of our fans are millennials and Gen-Z, it’s very important for ONE to drive authentic engagement at scale on social and digital media where a majority of our fans live, and create magical memories for them.

The fandom for mixed martial arts has increased through leaps and bounds in the last 10 years. Also, there are a whole lot of Asian countries like India where the sport has just managed to touch the tip of the iceberg. As the second most populous country in the world with over 65% of the population under the age of 35 years and an average Indian spending over 3.5 hours a day on their smartphone, the scope to bolster mixed martial arts as a sport in India is immense. Also, with homegrown talent like Ritu Phogat, Arjan Bhallar, and Puja Tomar, among others, placing the country on the global map, viewership from India has also exploded exponentially in the last two years. Countries like India continue to remain our core strategic market and we will continue to make long term investments to maximize the reach and frequency of mixed martial arts, creating a lineup of rising stars enabling us to make mixed martial arts a mainstream sport across the world.

While we’re very proud about standing shoulder to shoulder with NBA, NFL, etc., we know we have a lot of work still to be done to someday become #1.”

Chatri Sityodtong, Chairman and CEO – ONE Championship, said, “Thank you to the greatest fans in the world for inspiring me and my team to dream more, do more, and be more in life.”

Tubular Labs hailed ONE Championship as the #4 global sports media property (out of >5000) in 2019 in terms of online viewership. ONE, meanwhile, features the world’s most exciting martial arts action and enjoys a massive fan base not only in Asia, but also across Europe and South America. Its global footprint projects over 2.7 billion potential viewers worldwide, and it broadcasts events to 150 countries through free-to-air, linear, and digital channels. The promotion has a passionate following among key demographics on social media, particularly on Facebook and Youtube.

Apart from its flagship mixed martial arts product, ONE also offers a striking-only league – ONE Super Series – which hosts kickboxing and Muay Thai contests, as well as reality shows such as ONE Warrior Series and the upcoming The Apprentice: ONE Championship Edition. It also recently launched a podcast called Franklin Speaking, which stars multiple-time World Champion and mixed martial arts legend Rich “Ace” Franklin.

ONE, features the world’s most exciting martial arts action and enjoys a massive fan base in Asia, Europe and South America. Its global footprint projects over 2.7 billion potential viewers worldwide, and it broadcasts events to 150 countries through free-to-air, linear, and digital channels.