On the 75th Anniversary of the Battle of the Scheldt, a New Royal Canadian Mint Coin Honours Brave Canadian Soldiers Whose Victory Forged the Path to Liberating the Netherlands

OTTAWA, Ontario, July 31, 2019 /PRNewswire/ — The Royal Canadian Mint’s newest Second World War Battlefront Series fine silver coin commemorates the bravery and sacrifice of Canadian soldiers who, 75 years ago, helped the Allies win control of the Dutch and Belgian shores of the strategic Scheldt river. This costly battle, fought from September to October 1944, secured a vital supply line that helped Canada liberate the Netherlands and made the Allied liberation of Western Europe possible. The coin was proudly unveiled by Mint President and CEO Marie Lemay and His Excellency Henk van der Zwan, Ambassador of the Kingdom of the Netherlands to Canada. This ceremony took place at the Perley and Rideau Veterans’ Health Centre in Ottawa, in the company of Second World War veterans and Allied nations representatives. 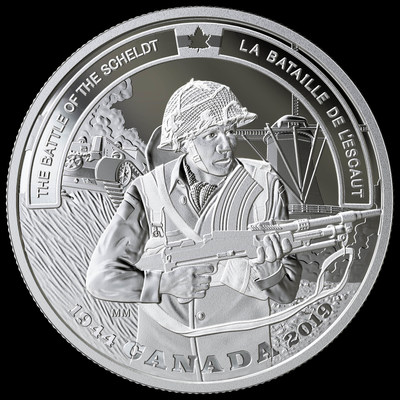 “The Mint is proud to honour Canada’s veterans through coins that preserve incredible stories of courage and sacrifice in defence of Canadian values,” said Marie Lemay, President and CEO of the Royal Canadian Mint. “Our newest collector coin shares the valour and determination that contributed to the hard-won success of Canada’s soldiers at the Battle of the Scheldt.”

“While victory at the Battle of the Scheldt ultimately helped pave the way for the Allied liberation of Western Europe, it came at a tremendous cost. More than 6,000 Canadians were killed or wounded during five weeks of intense conflict with well-fortified German forces along the Scheldt River,” said the Honourable Lawrence MacAulay, Minister of Veterans Affairs and Associate Minister of National Defence. “As time passes, it is critical that we not forget the contributions made by Canadians during the Second World War, and I am grateful that the Royal Canadian Mint is paying tribute to their eternal legacy of courage and sacrifice.”

Canadian artist Mary McPherson designed the Battle of the Scheldt silver collector coin, which presents a realistic portrait of a Canadian Ojibwa soldier in action in the fall of 1944. The insignia of the First Canadian Army appears above the infantryman, who wields a Bren gun while advancing past a tower mill. A Wasp MKII C flamethrower Universal Carrier backs the infantry advance from atop an embankment near the Scheldt River. The obverse features the effigy of King George VI by T.H. Paget.

About the Royal Canadian Mint
The Royal Canadian Mint is the Crown corporation responsible for the minting and distribution of Canada’s circulation coins. The Mint is recognized as one of the largest and most versatile mints in the world, offering a wide range of specialized, high quality coinage products and related services on an international scale. For more information on the Mint, its products and services, visit www.mint.ca. Follow the Mint on Twitter, Facebook and Instagram.

Images of this coin are available at https://www.dropbox.com/sh/v1hfiieazic1tbn/AAAmL7I_D_MHiKRTyoT2Ht3qa?dl=0

ERBA Mannheim to Unveil NEXUS Next Generation Automation at AACC 2019