LONDON, June 23, 2022 /PRNewswire/ — The red-hot semiconductor market reached a plateau in the first quarter of 2022 after five straight quarters of record revenues on top of continued growth, with the market declining just 0.03% against the prior quarter, according to Omdia’s latest competitive analysis of the worldwide semiconductor market.

“Total semiconductor revenue has been growing each quarter since 2Q20, and the market set new total revenue records each quarter beginning with 4Q20. But the market broke both those streaks in 1Q22, declining for the first time since 1Q20,” said Cliff Leimbach, Senior Research Analyst and author of Omdia’s Semiconductor Competitive Landscape (CLT) Spotlight Service.

Leimbach added that the decline was quite small given the size of the market, and semiconductor revenues remain near all-time highs. Revenue in 1Q22 declined from $159.35B in 4Q21 to $159.30B in 1Q22, and 1Q22 was the second highest revenue on record.

Moreover, the decline in 1Q22 is low by historical standards. Q1 typically is a down quarter as demand wanes after the holiday season. Since Omdia began tracking the market at a quarterly level in 2002, the average Q1 decline is 4.4%. (See chart.)

Nearly all semiconductor components experienced sequential growth between -5% and 5% in 1Q22 against 4Q22. Outliers included CMOS sensors, which declined 16% quarter-over-quarter. Typically, this market declines in 1Q, but additional factors were at play in this period:

Outside of the top two companies, of note was AMD, which rose from eighth to sixth place as their Xilinx acquisition closed. Memory companies (Samsung, SK Hynix, Micron) remain major influencers as the memory market held, with the total memory (DRAM, NAND, NOR) revenue down just 2.2% in 1Q22.

About Omdia
Omdia is a leading research and advisory group focused on the technology industry. With clients operating in over 120 countries, Omdia provides market-critical data, analysis, advice, and custom consulting. 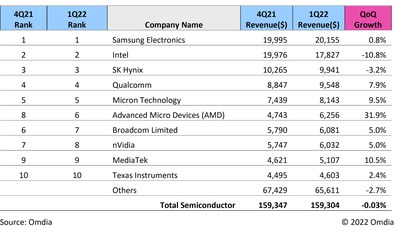 Sinch receives a tier one ranking in ROCCO’s latest reports for its A2P Monetization product suite and its SMS Firewall product for MNOs, and A2P SMS products for enterprises