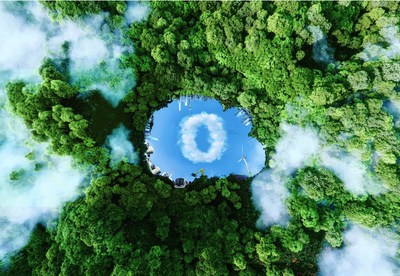 The campaign encouraged the public to walk rather than drive and, by doing so, help to make a low-carbon future a possibility. Every 2,000 steps completed by a participant represented one of the firm’s zero-carbon projects, turning on a light on a designated signboard. Once every one of the lights had been turned on, a lucky draw was held, with one participant receiving a complimentary prize.

Another feature of the campaign was that the first 1,200 attendees who completed 20,000 steps during the event will be joining Shanghai Electric in Yan’an, a city in China’s Shaanxi province. Here, they will witness the value of the online environmental initiative when they plant the exclusive Zero-Carbon Tree as a genuine opportunity to participate in low-carbon practices.

As an inseparable part of what it means to adhere to ESG principles, efforts in the public sector are key to social progress, with a broad and profound impact on both nature and society.

Responding to the Chinese government’s mission to reach the carbon peak by 2030 and carbon neutrality by 2060 (referred to as the 30-60 dual carbon goals), Shanghai Electric has added to the robustness of its own business through a range of best practices and strong capabilities.

In the energy and manufacturing sectors, the two areas most responsible for  the country’s energy consumption, Shanghai Electric has been building new, comprehensive power systems and a complete solution for futuristic zero-carbon industrial parks in a move to take the lead in helping the Chinese government achieve its decarbonization goals.

Making going green a vital part of its mission, Shanghai Electric has already taken many steps to vastly reduce its impact as much as possible on the ecological environment. The firm’s 44-square kilometer 700MW thermal power and 250MW photovoltaic solar power facility in Dubai is currently the world’s largest solar thermal project in terms of installed capacity, investment scale and molten salt energy storage.

During the construction of the facility, Shanghai Electric made environmental protection a key priority, appointing a local professional animal welfare agency to undertake an on-site survey and organize the safe transfer of local fauna, including lizards, camels, antelopes and red foxes. The effort also included the relocation of over 200 precious trees that had been growing on the site for years. The Dubai project has not only become a new benchmark for global solar power generation under the umbrella of the Belt and Road initiative but also demonstrated the actions taken by Chinese companies in protecting the environment and benefiting people’s livelihoods during their involvement in overseas projects.

The company has also extended its going green initiative to the public sector. In 2022, Shanghai Electric and Green Carbon Foundation undertook a green public service project whereby 1,200 trees were planted on the west bank of the Yellow River in Yan’an, a city in Shaanxi Province, in order to create a low-carbon forest to protect the river, as well as to assist the country in meeting the 30-60 dual carbon goals through practical actions. Shanghai Electric is committed to preserving the planet and advocating eco-friendly ideas throughout the whole company.

In April 2021, Shanghai Electric made a one-time donation of 700,000 yuan to support an economic development project in Shanghai’s Fengxian District, in addition to providing marketing support to Zhuangxing Town in Fengxian District to help in the sale of produce worth more than 1.3204 million yuan.

Over the course of 2021, Shanghai Electric provided 450,000 yuan in assistance funds to deal with identified practical issues, while helping to solve logistics issues in terms of getting more than 9.0516 million yuan worth of produce into the hands of consumers. These actions went a long way in helping accelerate the revitalization of rural areas.

As early as 2017, Shanghai Electric started to build the first rural distributed water treatment demonstration project in Huapiao Village, Chenjia Town, Chongming District. Without emitting any odor or noise, the compact 10-square meter integrated domestic sewage treatment station specially designed for the district was able to easily treat some 30 tons of domestic sewage discharged daily by over 100 farming households living in the proximity of the village.