• According to the Pan American Health Organization (PAHO) worldwide data, 533,172 people lost their lives due to neurological disorders in 2019

• Among applications, stroke occupied more than 40% of the total market share

The growing burden of neurological disorders is the leading aspect that is driving the neurorehabilitation devices market share. According to the Pan American Health Organization (PAHO) 2019 World Report, neurological illnesses Years of life lost due to premature mortality (YLLs) account for 7.5 million, with men accounting for 3.5 million YLLs and women accounting for 3.9 YLLs. Furthermore, according to the same data, there were more than 8.2 million years lived with disability (YLDs) in 2019 with men accounting for 3.1 million YLDs and 5.1 million YLDs for women. The growing elderly population is an important factor boosting the global neurorehabilitation devices market growth. Furthermore, growing research & development activities along with technological advancements are the two popular neurorehabilitation devices market trends that are strengthening the industry growth. 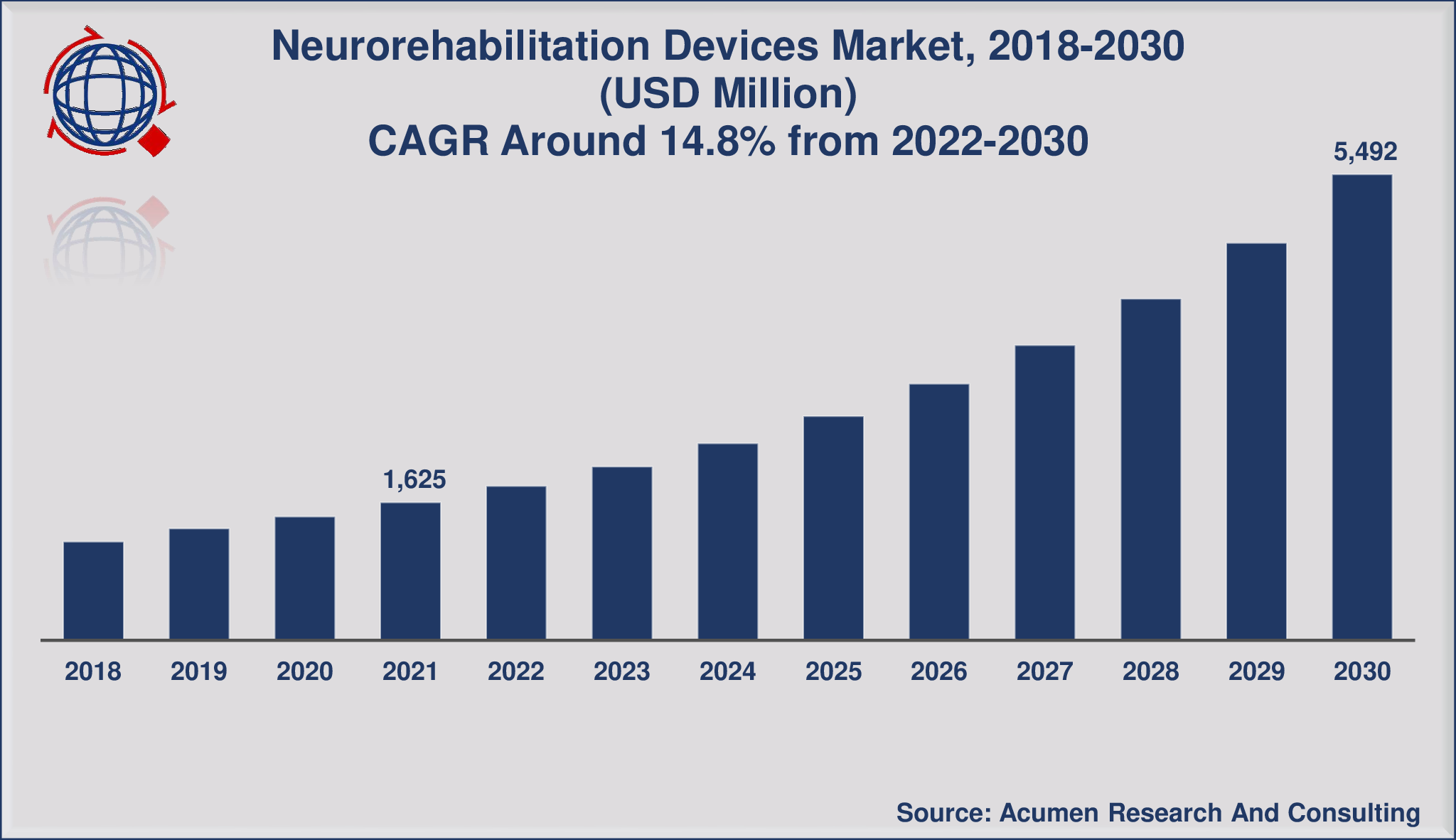 The higher cost of the neurorehabilitation devices hinders the market growth

Lack of ease associated with usage of these devices and its unaffordability mainly in emerging economies and low-income regions such as the Middle East and Africa, and Latin America. Additionally, the unavailability of skilled specialists to handle these devices limits the growth of the global neurorehabilitation devices market value globally.

Check the detailed table of contents of the report @

The neurorehabilitation devices market is segmented based on products and application.

By products, the market is segmented as neurorobotics, brain-computer interfaces, wearable devices, and noninvasive stimulators. According to our neurorehabilitation devices industry analysis, it is projected that neurorobotics will record a significant share in the global market in the forecast period. Advancement in the field of technology and prominent manufacturers focusing on the development of new technological devices that are best suited for the neurorehabilitation devices market to grow to its fullest globally.

By application, the market is segmented as stroke, multiple sclerosis, Parkinson’s disease, cerebral palsy, and among others. Further, by application segment, the stroke segment will record significant market revenue for the industry worldwide as per our neurorehabilitation devices market forecast.

North America is dominating the global neurorehabilitation devices regional market in the past and will continue its trend in the forecast period. This is due to the high prevalence of the rising geriatric population suffering from stroke, the high prevalence of Alzheimer’s and Parkinson’s disease, and technological advancements for the growth of the North American regional market to grow to its fullest. According to PAHO neurological conditions in the US accounted for 47.39 deaths per 100,000 in 2019.

On the other hand, Asia-Pacific regional market will gain a steady pace in the neurorehabilitation devices market in the coming years. This is achieved due to rising disabilities in the aging population and the rate of people suffering from a stroke. Further, the Asia Pacific market is expected to record the highest CAGR of around 15.5% in the forecast period. A rising patient base with neurological disorders and robust improvement in healthcare infrastructure will create lucrative opportunities for companies to enter such a lucrative market. Due to promising market potential, companies are adopting strategic initiatives to expand their operations in the Asia-Pacific neurorehabilitation devices market.

The global neuro-rehabilitation devices market is highly competitive in nature. The competition is marked by the implementation of sustainability strategies by prominent players such as Alter G, Bioness, Hocoma, Ekso Bionics, St Jude Medical, Instead Technologies, Meditouch, Touch Bionics, Kinova Robotics and among others, and others.

Some of the key observations regarding the neurorehabilitation devices industry include:

• In January 2019, Ekso Bionics Holdings, Inc. announced the expansion of its medical exoskeleton portfolio with upper extremities rehabilitation devices namely, EksoUE. The study of EksoUE is integrated with a unique therapeutic neuro-animated game that is in testing for early stroke recovery. This new therapy aims to engage patients in more diverse and complex motor movements by increasing active range of motion and reducing patient fatigue.

• In December 2018, BIONIK Laboratories announced a multiyear agreement with Kindred Hospital Rehabilitation Services for multiple units of the company’s InMotion Arm robotic system. As part of this agreement, Kindred will start installing InMotion robots in its existing inpatient rehabilitation hospitals and similar facilities across the US with a second phase to include installation in new kindred inpatient rehabilitation hospitals and similar facilities within the next four years.

Some of the key observations regarding the Vein Illuminator industry include:

• Christie Medical Holdings has exhibited VeinViewer® technology at the Ambulatory Surgery Center Association’s (ASCA) annual meeting, which was held at the Gaylord Texan Resort and Conference Center in May 2016. The VeinViewer can provide a positive patient experience by reducing the number of stick attempts with reduced time.

• Los Altos-based Evena Medical has launched Eyes-On Glasses System, which helps healthcare professionals to see vasculature below the skin to deliver needles safely on the first try every time.

• iPhone has come out with a solution for the secure biometric authentication technology for identical twins and family relations with its 2019 iPhone.

• In 2016, Valley Hospital in Ridgewood invested in vein illuminators particularly to ease the process of IV insertion and drawing of blood as well as to enhance the administration of IV medications.

• AccuVein AV 400 has issued a medical device license in 2018 for usage in Canada. The incorporation of various technologies in the device helps in detailed imaging of the vein structure. The efficient working of the device enhances its usage in various applications such as vein puncture, cosmetic procedures, vascular procedures, blood draw, and other medical procedures.

Questions Answered By This Report

About Acumen Research and Consulting:

Acumen Research and Consulting is a global provider of market intelligence and consulting services to information technology, investment, telecommunication, manufacturing, and consumer technology markets. ARC helps investment communities, IT professionals, and business executives to make fact-based decisions on technology purchases and develop firm growth strategies to sustain market competition. With the team size of 100+ Analysts and collective industry experience of more than 200 years, Acumen Research and Consulting assures to deliver a combination of industry knowledge along with global and country level expertise.