SEOUL, South Korea, Aug. 18, 2020 /PRNewswire/ — Netmarble has announced that its highly-anticipated new mobile game BTS Universe Story will be available for pre-registration starting August 18. Pre-registration will be available for players worldwide (except China and Vietnam) on the official website (https://btsuniversestory.netmarble.com) until launch date, which will be announced soon. 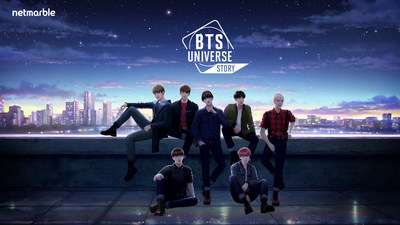 BTS Universe Story is an interactive mobile storytelling platform and the second collaboration between Netmarble and the global superstars, following the global success of the BTS WORLD mobile game that launched in June 2019. The app allows players to explore existing stories based on BTS Universe, create and share stories of their own featuring the group, and interact with other players.

The main feature of the game, BTS Universe Story‘s Create Story mode gives writers the ability to create their own stories using in-game production tools. Play Story mode provides already-created, interactive stories that develop as players make choices that shape the narrative. In addition, the game features an AR mode and a Collection function where wardrobe for characters in BTS Universe can be customized.

A special pre-launch Writer Recruitment event is being held through August 24. Anyone can participate in the event, and selected writers will be given early access to the games’ editing tools to create stories in advance of launch. These stories will be officially added to the Play Story mode so all players can enjoy them following the game’s release.

To celebrate pre-registration, an exclusive video featuring the main characters in BTS Universe has been added to the official BTS Universe Story YouTube channel. The video teases the game and features a photo of boys with the sea in the background revealing the meaningful phrase “Now, please be our story.”

Established in Korea in 2000, Netmarble Corporation is a top developer and publisher pushing the boundaries of the mobile gaming experience with highly innovative games including Lineage 2: Revolution, The Seven Deadly Sins: Grand Cross, Blade&Soul Revolution and MARVEL Future Fight. As a parent company of Kabam, and a major shareholder of Jam City and Big Hit Entertainment, Netmarble strives to entertain audiences around the world with a variety of mobile games based on its powerful franchises and collaborations with IP holders worldwide. More information can be found at http://company.netmarble.com

Founded in February 2005 in South Korea by CEO and Producer Bang Si-Hyuk, Big Hit Entertainment’s core business focuses on music production, artist management and publishing. Big Hit’s business ventures incorporate and develop a range of content produced from top-notch artists’ IP, including global superstars BTS and its newest addition TOMORROW X TOGETHER. With its mission of ‘Music & Artist for Healing’, Big Hit strives to impart a positive influence through content while providing comfort and inspiration to music fans worldwide.