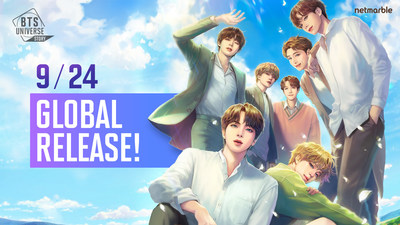 BTS Universe Story is the second collaboration between Netmarble and the global superstars, following the global success of the BTS WORLD mobile game. The app features 3D scanned BTS Universe characters and allows players to explore existing stories based on the BTS Universe, create and share stories of their own featuring the group, and interact with other players.

The interactive social game lets players directly participate in the creation and development of stories within the game, selecting choices throughout that lead to different outcomes. With a variety of stories based on the BTS Universe, BTS Universe Story provides a “Story Creation” mode where anyone can easily create their own story using in-game production tools, as well as a “Story Playthrough” mode that lets players select choices in pre-existing stories to shape the story line.

The game also features a “Collection” mode, letting players collect clothes and accessories to style the characters in the BTS Universe, along with the capability to capture AR photos with their own customized characters.

To celebrate the launch of BTS Universe Story, Netmarble has announced a 7-day daily check-in event with a reward of 30 Jewels. In addition, players can receive various in-game rewards such as a Logo T-Shirt or a Story Creation Theme for creating a Story that receives a specific number of “Likes” from other players. Players who pre-register for the game will also receive a Pre-registration Special Selector as a reward, which can provide a ticket for a costume set for one member of the group.

Established in Korea in 2000, Netmarble Corporation is a top developer and publisher pushing the boundaries of the mobile gaming experience with highly innovative games including Lineage 2: Revolution, The Seven Deadly Sins: Grand Cross, Blade&Soul Revolution and MARVEL Future Fight. As a parent company of Kabam, and a major shareholder of Jam City and Big Hit Entertainment, Netmarble strives to entertain audiences around the world with a variety of mobile games based on its powerful franchises and collaborations with IP holders worldwide. More information can be found at http://company.netmarble.com

Founded in February 2005 in South Korea by CEO and Producer Bang Si-Hyuk, Big Hit Entertainment’s core business focuses on music production, artist management and publishing. Big Hit’s business ventures incorporate and develop a range of content produced from top-notch artists’ IP, including global superstars BTS and its newest addition TOMORROW X TOGETHER. With its mission of ‘Music & Artist for Healing’, Big Hit strives to impart a positive influence through content while providing comfort and inspiration to music fans worldwide.