NEW DELHI, Nov. 10, 2021 /PRNewswire/ — The Nazir Hoosein Memorial Drive by Team Firefox today announced that Mahindra Adventure is the presenting sponsor of the drive. Mahindra & Mahindra Ltd. has a long history of association with the Himalayan Rally, having been involved with the event right from its first edition in 1980. Taking this legacy forward, Mahindra Adventure, the experiential marketing vertical of Mahindra & Mahindra Ltd. has come onboard as the presenting sponsor. As a part of the association, the All-New Mahindra Thar, among others, will be a prominent SUV from the Mahindra stable in the drive. In addition, 15 Mahindra SUVs will also be seen supporting the execution and management of the drive. 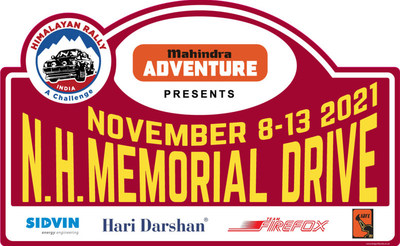 The event received a further boost right before its flag off, with several former winners and winners confirming their participation in the event, set to flag off on November 8th.

Commenting on the association, Harish Lalchandani, Head of Marketing (PV & Pickup, Mahindra & Mahindra Ltd. said, “The Nazir Hoosein Memorial Drive has its deep-rooted legacy in motorsports and adventure. With our decades of experience in building authentic and capable SUVs that encourage people to explore the impossible, we are proud to be a part of this nostalgic journey.”

Mahindra Adventure will have two All-New Mahindra Thar, among others, at the NHMD, both in retro fitted colours of the original Himalayan Rally. The first car to be flagged off, on November 8th will be the All-New Mahindra Thar driven by Col (Retd.) SS Sekhon, a six-time winner of the Himalayan Rally. The second car will be driven by Surinder Thatthi, Vice President Sport at the FIA. Thatthi was involved hugely with the original event in the 1980s and in fact India coordinator for the Opel factory team that won the inaugural edition.

Among the participants are Colonel (Retd) SS Sekhon, one of the most experienced drivers in the field, who participated in nine of the eleven editions of the Himalayan Rally. Col Sekhon won the top Indian car award thrice and with his teammate Captain Chauhan, was a household name around the Himalayan Rally.

The drive will also see Manjeet Bhalla and Flory Roothaert in action, a major throwback to the 80s when the duo were the pair to beat at the Himalayan Rally. Bhalla was the first Indian co-driver to navigate a world class rally driver at the Himalayan Rally when he partnered Roothaert — a man with immense experience on the international stage. Roothaert’s driving style won him multiple individual podiums and endeared him to Indian fans, a feeling that was mutual.

NHMD is also privileged and thankful to Army Adventure for sending their all-ladies team in support of the drive. The team will comprise Lt Col Euthica and Major Tejal Parashare. Lt Col Euthica is widely regarded as one of the best women rally drivers in the Army, leading the first all-woman team by the Army in the Extreme category of the Raid de Himalaya 2018 and Desert Storm 2019. She won the Coupe de Dames in the Royal Rajasthan Rally 2019 and bagged the top place in T2 category in SJOBA 2019. The duo’s association with the drive is a huge boost for the event.

Mahindra Adventure is a title sponsor of the event, in continuation of its association at the inaugural event. Other sponsors include Haridarshan, Sidvin, IARC, Hella, Motul and supported by Apollo Healthcare.

Please find below the link to additional images from the The Himalayan Rally of the 1980s: https://drive.google.com/drive/folders/1D-xKMFYJJDO1lRn1I0sgO1D9Yu8dix08?usp=sharing

Disclaimer: Courtesy for pictures and videos to be given to Team Firefox.

This event is brought to you by Team Firefox, who have 20 Himalayan rallies between them and endorsed by IARC – the founding club of Nazir Hoosein.

The Drive is open to all, not just past Himalayan Rally participants.

To showcase the beauty of the unique Himalayas, participants will be following the 1981 Himalayan Rally Route as much as possible via Lansdowne, Mussoorrie, Kufri and Manali being the night halts.

The route will take you through three high mountain passes over 10,000 ft high with scenic mountain views, many selfie stops and a mini treasure hunt to spot clues on the way to keep you and your team enjoying the drive in a once in a life time experience.

Bring the vehicle of your choice although we might see some classic cars, best car choice would be a SUV/MUV for the event. You can have 2/3/4 people in the car as long as the vehicle is in excellent shape for the journey. We will have a sweeper car following the last vehicle to help with any minor repairs or puncture tyre changes.