My Talking Angela 2 is Here and Heads Straight to AppGallery 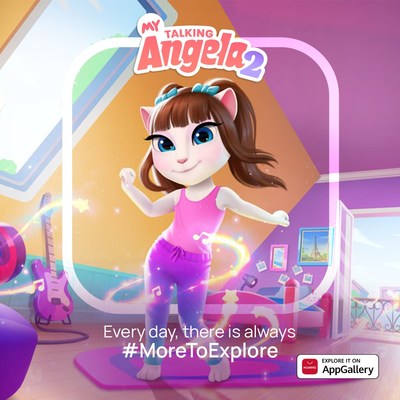 “The joy of My Talking Angela 2 is that not only is it fun to play, it also supports the individual style of the player,” said Gray Zhang, Head of Gaming and Developer Relations, CEE and Nordic, Huawei Consumer Business Group. “Unlike other games that sell an idea of the ‘right’ look, this title promotes the right for players to be whoever they want to be and play however they want to play. We’re delighted to work with Outfit7 and be able to launch their fantastic games on AppGallery.”

My Talking Angela 2 encourages its players to experience the magic of friendship through a series of dynamic activities that highlight the importance of self-care and self-expression. With countless customisation options, players can dress Angela up, do her hair and makeup, and decorate her apartment to suit their own tastes.

“From the number of customisation options, to the high-quality art and game design, we’re pushing the limits of what can be done on mobile with My Talking Angela 2,” said Xinyu Qian, CEO of Outfit7. “In this game, we have brought Angela to life like never before, and we can’t wait to see what players think of our newest addition to the Talking Tom & Friends gaming universe.”

My Talking Angela 2 follows the success of Outfit7’s earlier release Talking Tom Gold Run¹, which is now among the top 5 most downloaded games on AppGallery in China. Huawei will support the game by creating special watch faces featuring Talking Angela for Huawei’s latest line of smartwatches. In addition, fans can watch Talking Angela in the CGI-animated Talking Tom & Friends² series. Based on the multi-award-winning franchise of the same name, the show is available on Huawei’s video platform, Huawei Video.

As one of the world’s fastest-growing app marketplaces, AppGallery strives to partner with leading brands and gaming developers, whose titles attract the biggest global audiences. AppGallery operates in 170 countries around the world, with 540 million monthly active users worldwide.

¹ Talking Tom Gold Run is currently the 4th most downloaded game on AppGallery in China; as of 15 July 2021.

² The Talking Tom & Friends series is available on Huawei Video in selected countries; prices may vary.

MYM, The First French Social Network that Brings Creators Closer to Their Fans, Launches Its New Version to Expand Its Community