MoonRacers Combines the Best of Temple Run and the Web 3.0 Giant Axie Infinity

Most people who grew up with a smartphone will remember the phenomenon that was Temple Run. The endless running game was a must-have for avid and casual gamers alike. If you were one of them, then there’s good news coming up. Play-to-earn (P2E) platform, Open League, will soon be launching a new NFT game that’ll be a trip down nostalgia lane for those of us who grew up playing Temple Run.

Triadista, Bulgaria, Sept. 16, 2022 (GLOBE NEWSWIRE) — MoonRacers brings all the features you love about Temple Run and Subway Surfer and combines them with an exciting cosmic storyline and an innovative gaming experience.

With the Open League Web3 gaming platform, NFT and crypto investors will now have the chance to monetize their racing teams and dynasties, and play daily for chances to win thrilling prizes. The platform’s “dynasties” offer a unique take on teams, allowing users to build and even earn off the members within their dynasty. MoonRacers is Open League’s genesis NFT game, and every MoonRacer NFT that you own allows you to own and customize your own racers team.

MoonRacers runs on a unique bottom-up approach, which allows for the strongest game design. With this method, users that join early will hold more chances to earn from the platform. Owning a MoonRacer NFT, can make users an owner of a potential team consisting of 7 players below them. From there, the team structure can grow exponentially as each team member can recruit their own team of players.

The players joining your team are building your dynasty, and as your dynasty grows, so does your chance to earn additional revenue. A user’s dynasty can quickly grow to encompass thousands of players. Each of those players has the potential to win cash prizes, and you as the captain above, will win together with them.

How this unique rewards structure works

Every week, the game will name a champion who earns a cash prize. If you are the “captain” of your team, you automatically gain a 10% royalty from prizes that team members own. Being the captain simply means you’re a team creator. From there, a 10% royalty goes to the dynasty creator. 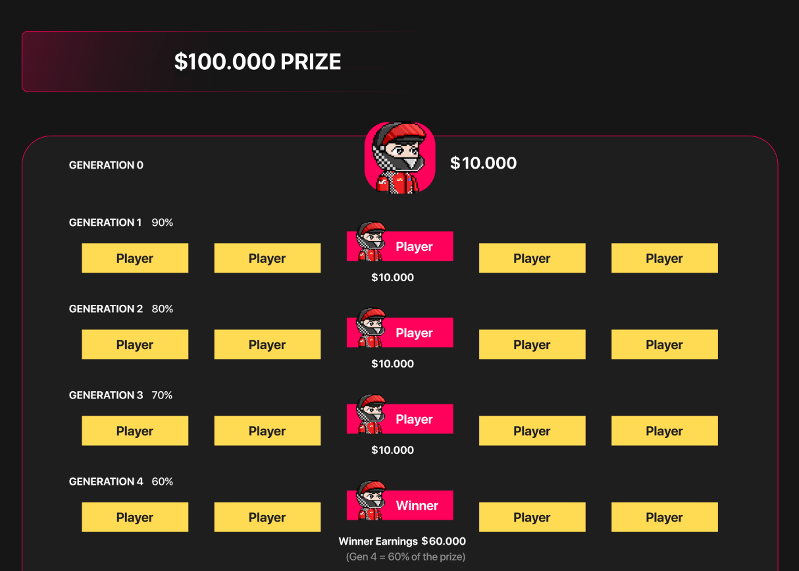 In other words, each dynasty will have an OG creator who reserves a 10% royalty for individual team member winnings. Underneath the dynasty creator can be several team creators, who have the chance to win as well. If you’re earning prizes as a team creator, this means either you’ve won them yourself, or one of your team members has won. In the latter case, you’ll be earning a royalty from your team member’s earnings.

One challenge that NFT-based games face right now is that they tend to launch and subsequently drop in value. By offering a continuous stream of cash prizes, MoonRacers counters that by offering real yield potential, adding intrinsic value to the NFTs. As more users continue to jump on board, the potential winnings become greater.

Traditional gaming has recently been valued at $155 billion. Now, with the emergence of Web3 gaming and an entirely new user experience, experts predict the industry will grow to $260 billion by 2025.

Being a part of the Web3 family, Open League hopes to introduce solutions to the many current challenges with Web2 gaming. For one, traditional games lack the economic potential that their users want. Instead of offering avenues for more tangible rewards for gamers, all revenue in Web2 gaming flows one way toward big gaming corporations.

With Web3 games, the playing field between users and developers starts to level out. Now, gamers have the chance to monetize their time spent online and have an impact on the future development of the games they play.

Additionally, platforms like Open League allow a more secure atmosphere that’s not saturated with terms and conditions. Web2 games love to throw in stipulations that allow them to share player data, which may include business, personal, and/or financial information. As a result, users tend to feel their safety could be at risk when playing Web2 games.

Games like MoonRacers are a step in the right direction for the gaming industry. As the blockchain evolves and expands, so will Web3 gaming. If you’re someone who longs for autonomy and more control over the games you play, then we invite you to dive into the Open League platform.

Instead of reinventing the wheel, Open League is making it better. They are creating a model that focuses on decentralized ownership, tradability, and functional revenue. Furthermore, the platform is committed to being one that’s user-focused and player-owned. This allows players to take something that they love and monetize it. No longer will games be played just for fun. More users will have the opportunity to build on their efforts.

Open League games are all about owning digital assets, building sports teams, and playing for prizes. The experience promises to be unparalleled to any Web2 game that primarily rewards single entities and won’t be concentrated only in the hands of a few. With Open League, the power belongs to all.