REDMOND, Washington, March 3, 2020 /PRNewswire/ — Microsoft Corp. and the National Football League on Tuesday announced an expansion of their deep technology partnership. The multiyear expansion aims to help the entire NFL, including its coaches and players, be more efficient through enhanced communication and collaboration via Microsoft Surface devices and Microsoft Teams, the hub for teamwork in Office 365.

“Since 2013, Microsoft has helped transform the NFL through technology around our game,” said Renie Anderson, chief revenue officer and executive vice president of NFL Partnerships. “Microsoft Surface has quickly become an authentic tool to the game of football and is vital during all NFL games for coaches, players and NFL Officials. And now by working together to integrate Microsoft Teams across the League, together we aim to improve on communications and collaboration in a modern way.” 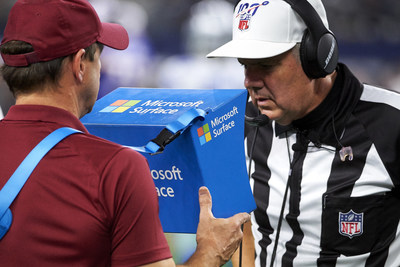 “We’re inspired to continue to help the NFL accelerate its digital transformation,” said Yusuf Mehdi, corporate vice president, Modern Life, Search and Devices, Microsoft. “We’ve worked together to innovate the way the game is played with Surface devices to power Instant Replay and in-game play review for players and coaches on the sidelines. And by combining Surface and Microsoft Teams deeper into the fast-paced workflow of the League, we have an incredible opportunity to bring together the power of hardware and software to help everyone be more productive.”

As part of the partnership expansion, Microsoft and the NFL will now work together on modern collaboration technology to further empower the League using the new Microsoft Teams platform. Designed to work seamlessly across Windows, iOS and Android devices, Microsoft Teams brings together chat, calling, meetings, files, document collaboration and workflow into a single app. Rather than use separate apps for those experiences, NFL teams and the entire organization can collaborate and stay constantly and securely connected on Microsoft Teams.

“The Miami Dolphins rely on Teams for all cross-functional strategic projects. In Teams we can easily collaborate on files, manage shared calendars, host meetings, and use existing integrations. Teams made cooperation with the NFL possible throughout the regular season and with Super Bowl planning,” said Kim Rometo, vice president and chief information officer for the Miami Dolphins. 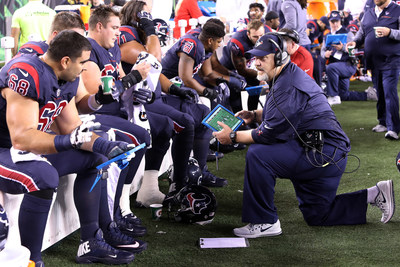 Microsoft continues to deliver exceptional performance to the NFL with the Microsoft Surface Sideline Viewing System (SVS), bringing near-real-time images and game data, such as down, distance and yard line information, to the players and coaches on the sidelines and to the coaches in the coach’s booth. In addition, Microsoft Surface Instant Replay (MSIR) brings mobile instant replay to the officials on the field, helping improve pace of play. With more than 2,000 Surface devices and 170 Windows Servers deployed across 35 global stadiums, Microsoft technology powers 333 events each year for the NFL on game day.

Beyond the sideline integration, Microsoft works with every NFL team and their partners to develop unique business and consumer-facing integrations to deliver real-world productivity solutions. Ranging from Surface devices serving as playbooks, to film reviews being conducted on the Surface family of devices, to in-stadium usage on gamedays, to business operations teams using Surface devices in their front office, it is clear that NFL teams have embraced Microsoft as a true technology partner.

Microsoft (Nasdaq “MSFT” @microsoft) enables digital transformation for the era of an intelligent cloud and an intelligent edge. Its mission is to empower every person and every organization on the planet to achieve more.