– Only U.S. patent holder in the CRISPR chromatin space

DARMSTADT, Germany, April 7, 2020 /PRNewswire/ — Merck, a leading science and technology company, today announced that the United States Patent and Trademark Office has granted the company’s patent for CRISPR-chrom technology. With this allowance, Merck is the only provider with a patent covering the fusion of chromatin modulating peptides to CRISPR proteins, helping to clear chromatin out of the way, increasing access to the genome. 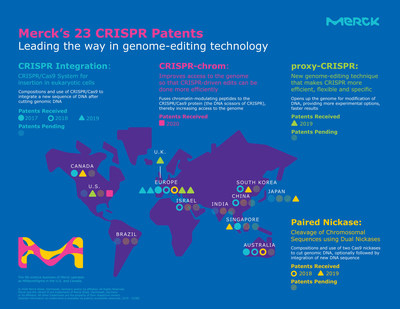 “This award marks our second U.S. CRISPR patent and our 23rd CRISPR-related patent worldwide, and as a leading innovator of CRISPR technology, we will continue to drive innovation and collaborate with scientists around the world to ensure that they have the most advanced gene-editing options,” said Udit Batra, member of the Merck Executive Board and CEO, Life Science.

Because genomic DNA in mammalian cells is wrapped tightly in protein complexes called chromatin, the genomic DNA is often inaccessible to CRISPR. Merck’s CRISPR-chrom technology works by fusing chromatin modulating peptides to a CRISPR protein, Cas9 (i.e., CRISPR’s DNA scissors), allowing for more efficient gene editing. This work was initially published in the February 2018 issue of The CRISPR Journal and was one of the journal’s top five downloaded articles of the year.

The Life Science business of Merck, a leader in genome editing, conducts research and development to drive improvements in gene-editing technologies.

Merck received its first U.S. patent in February 2019 for its proxy-CRISPR technology, which makes CRISPR more efficient, flexible and specific. The company has successfully out-licensed its CRISPR patent portfolio and continues to license its entire CRISPR patent portfolio for all fields of use. Merck is proactively and aggressively pursuing CRISPR patent out-licensing partners for therapeutics, agriculture and research and welcome such collaboration opportunities.

CRISPR technology is a core competency for Merck, which has 16 years’ experience with genome editing, spanning from discovery to manufacturing. The company develops technologies in a range of genome-editing applications, including gene knockout, gene integration and CRISPR libraries for genetic screens, among others.

Merck recognizes that genome editing has resulted in major advancements in biological research and medicine. At the same time, the growing potential of genome-editing technologies has opened scientific, legal and societal concerns. The company supports research with genome editing under careful consideration of ethical and legal standards. Merck has established an independent, external Bioethics Advisory Panel to provide guidance for research in which its businesses are involved, including research on or using genome editing, and has developed, defined and transparently published a clear operational position taking into account scientific and societal issues to inform promising therapeutic approaches for use in research and applications.

All Merck news releases are distributed by email at the same time they become available on the Merck Website. Please go to www.merckgroup.com/subscribe to register online, change your selection or discontinue this service.

About Merck
Merck, a leading science and technology company, operates across healthcare, life science and performance materials. Around 57,000 employees work to make a positive difference to millions of people’s lives every day by creating more joyful and sustainable ways to live. From advancing gene editing technologies and discovering unique ways to treat the most challenging diseases to enabling the intelligence of devices – the company is everywhere. In 2019, Merck generated sales of €16.2 billion in 66 countries.

Scientific exploration and responsible entrepreneurship have been key to Merck’s technological and scientific advances. This is how Merck has thrived since its founding in 1668. The founding family remains the majority owner of the publicly listed company. Merck holds the global rights to the Merck name and brand. The only exceptions are the United States and Canada, where the business sectors of Merck operate as EMD Serono in healthcare, MilliporeSigma in life science and EMD Performance Materials.