BENGALURU, Sept. 30, 2019 /PRNewswire/ —  The Maruti Suzuki Arena Devils Circuit (MSADC) held in Bengaluru on September 28-29, 2019 was a sold out, smashing success and showed how well the city had taken to this innovative running format. This was the second race of the eighth season of Asia’s Toughest Obstacle Race-the first having been held in Chennai earlier this month, MSADC-Bengaluru witnessed a participation of over 9,000 running enthusiasts from around the country, the US, and Europe, with crowds reaching the venue as early as 5AM for their race which was to begin at 7. What started as India’s first obstacle running series-created and conceptualised by Volano Entertainment Pvt Ltd (a company that specialises in creating-IP led properties in the space of disruptive participative sports) in 2012 has now become a nationwide phenomenon. At MSADC, the 5-Km racetrack is interspersed with 15 military-style obstacles, giving even the most amateur participants a true test of their own fitness and stamina. Each season that begins in September, travels through multiple cities before culminating in a grand finale at the company home ground – NCR. The current season began on the 8th of September in Chennai and after Bangalore, will head to Hyderabad, Mumbai and Mohali before reaching NCR in march 2020. 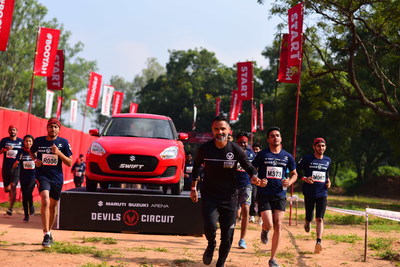 The Maruti Suzuki Arena Devils Circuit has the honour of being home to the biggest and most engaged community of runners across the country, -‘The Tribe of Swiftdevilslayers’ – and this is testament to the incredible experience each participant has at each edition. The DC Village which offers an afterparty at the finish line ensures participants and spectators alike stay on for hours post the finish of the run, soaking in the incredible ambience, dancing to the beats of an in-house DJ and following the moves of a team of skilled dancers. The more sports inclined amongst them find their space in either the custom built Swift Football Zone or the Apollo Tyres Fitness Zone – each hosting competitions and giving away prizes through the day.

As always, the first wave in Bengaluru on September 28 was dedicated to the Legends Cup category of participants. The Legends Cup is an all-city obstacle race for pro-athletes, fitness enthusiasts, as well as army professionals who compete for the biggest prize in the amateur sports space in Asia. Two Maruti Suzuki Swift cars are reserved for top finishers in the men’s and women’s categories at the end of the Season, while the top five runners receive cash prizes worth INR 5,00,000. Legends Cup being one of the most prestigious leagues in the country, often sees participants from the previous years aiming to defend their titles. The Bengaluru Edition, especially, has always been a game changer for Legends Cup participants. Here, a lot of new runners join the championship and the scores change dramatically. The Bengaluru race brought three winners from the previous seasons to defend and reclaim their titles. Sukhchain Singh and Diksha Kapoor, winners from Season 2018-19 and Sanjana George, winner of Legends Cup 2017-18, all brought their A-Game to the track and displayed spectacular competitive spirit.

Legends Cup podium finishes have always been unpredictable: in Bengaluru, the men’s category saw a brand-new entrant at the top spot. Lucas Kempe, a pro-athlete and global OCR enthusiast who incidentally stood fifth earlier this month in Chennai claimed the top spot by completing the circuit in a smashing 33 mins 25 secs. Sukhchain Singh finished only two secs later, claiming second spot. At third spot was Vivekananda G, who completed the race in 33mins 56 secs. In the women’s category, Diksha Kapoor defended her Chennai top spot by finishing at 39 mins 18 secs. Following her closely at second place was winner of Season 2017-18 Sanjana George, and at third place was Nivedita Singha, a new entrant from Himachal Pradesh who finished at 43 mins 37 secs.

This year, Maruti Suzuki Arena Devils Circuit has explored synergies with brands that can help make the journey of the participants better on the race day. As such, they have launched ‘A Better Tomorrow’ campaign and aligned their sponsors and partners towards a solitary goal-that of making the social fabric of the lives they touch, more impactful. As title sponsor, Maruti Suzuki propagates a healthier, happier tribe of #SwiftDevilSlayers and supports community building efforts that make everybody stronger. Associate Sponsor Apollo Tyres comes in strong to support women runners through the tagline ‘Stronger Women, Stronger Tribe’ and propagates their belief that when the women in the community are strong, the future is secured. Danish sports and lifestyle brand, Hummel, comes in as Apparel Partner, providing each participant with Race Day T-shirts made from 100% recycled pet bottles-a great move towards sustainability one can bring in everyday life. Nutrition Partner GAIA Good Health, an organic homegrown brand, supports healthy living as fundamental to a happy life and will enable the running community with recipes, health tips that will help them prepare for a Healthier Tomorrow. Earthling First, the sustainable waste management company that spearheaded the movement of sustainable event spaces, is a partner with Maruti Suzuki Arena Devils Circuit and recycles over 85% of the waste generated at each event, sending less than 15% to the landfill.

The continuous growth that Maruti Suzuki Arena Devils Circuit has experienced in the past seven seasons is encouraging for organisers in the disruptive sporting space. Add to that, the collective responsibility showcased by some of the country’s leading brands from the automobile, lifestyle, and nutrition industries at this event is a promise that there is a community of over 2 million SwiftDevilSlayers and international industry leaders who are leading the way to a brighter future.