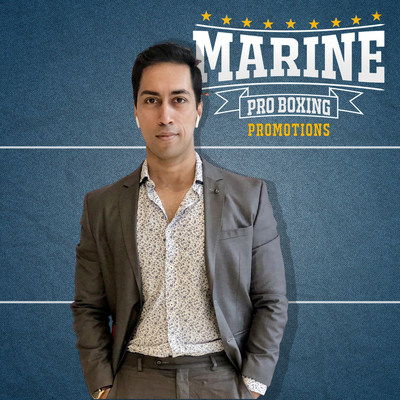 Devraj Das, the Founder of the company who is a fitness enthusiast and a public figure who has been a known face in the entertainment industry & enjoyed a cult following, had his love for martial arts & boxing since his early school. As an audience he loved watching MMA & Boxing events whenever an international boxing or MMA event of was hosted in Asia. In 2015 Devraj started networking with event organizers & promoters from the MMA & Pro Boxing industry & later in 2017 travelled to Thailand, Indonesia, Philippines & interacted with sports promoters. In the meanwhile, professional Boxing was slowly evolving as a new fan favourite in the likes of MMA in India where it had bigger & commercial potential since Pro Boxing is among the top sports globally in the lines of Basketball, Football, Badminton, Cricket across the globe.

Since its formation in 2019, Marine Pro Boxing Promotions has already hosted 10 fight nights across India & on foreign soil. Marine Pro Boxing Promotions is a combat sports promotions company established to raise the bar for professional boxing in India from managing athletes, signing boxers & promoting sporting events in a grand scale. Until now over 130 bouts & 70 Indian Boxers have fought under the company’s banner. The company has hosted fight nights across Mumbai, Kolkata, New Zealand & Thailand featuring Indian & International athletes from various countries. Post pandemic Marine Pro Boxing is making its comeback with its Warrior Boxing Series which is scheduled for Delhi & Mumbai in December as a closed door event. The event structure for 2021 has already been planned with 6 Grand events in India & 2 events across Asia which will give a global exposure to hundreds of Indian boxers who wish to make their career in pro boxing. A Pro Boxing Championship season will be announced in January 2021 which aims to take this brand from India to the Middle East.

The company’s prime focus is to change the life of Indian professional boxers who aim to pursue a career in pro boxing & wants to sign at least 400 Boxers under its management.  Marine Pro Boxing is also seeking for investors who are keen to join & develop the combat sports business which is a billion dollar industry across the globe.