KUALA LUMPUR, Malaysia, Oct. 18, 2019 /PRNewswire/ — Mr. Hishammuddin Hussein, the former Defence Minister of Malaysia, has called on his countrymen to work towards uniting all races and working towards the nation’s progress. 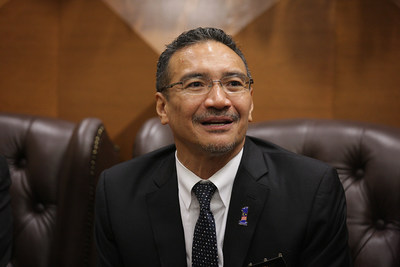 In a letter issued to the Malaysian media, Mr Hussein said: “The past few weeks have witnessed talks on unity from across political lines. Whether it is in terms of political cooperation, or Malay Unity – I have always been consistent, I support any effort to unite Malaysians at any level. Whether it begins at the societal level, or between the Malays first, we must realise that this effort has been undertaken since before our days of Independence,” adding, “In 1946, my grandfather Dato Onn Ja‘afar convened a meeting of more than 40 Malay organisations, uniting the Malays to oppose the British Empire and the formation of the Malayan Union. While this led to the founding of the United Malays National Organisation (UMNO), he realized an independent Malaysia will not be able to succeed only based on Malay Unity. This led to his resignation from UMNO in 1951 because they rejected his proposal to open UMNO’s membership to all races.”

The former Defence Minister warned: “Though not exactly, history is repeating itself. Whether it was through Muafakat Nasional or by the Kongres Maruah Melayu – the central focus of these events may be seeds that have been planted to grow into a larger theme of unity, which involves the other races that make up our multiracial nation.”

He added: “I know, and it is expected, that the racial rhetoric surrounding these events have led to the other races feeling sidelined and being attacked, shadowing any good intention these events may have aimed to achieve. This threatens to unravel the fragility of our society. Instead, we should focus our attention on the struggle and determination of the leaders to unite the Malays, who represent the majority of our population. Non-Malays, however, must not be worried, as we understand that Malay unity cannot come at the expense of the unity of all Malaysians, it is purely the foundation of a larger, all-encompassing effort to unite our divided country.”

Mr. Hussein said: “Malaysia seems to be stuck in a whirlwind of hate speech and fake news, fueled by worsening racial relations that both sides of the political divide are responsible for. But who must lead the solution? We as the political leaders of the country must take charge and realise we need to fix this before it gets worse. I admit, this may not be an easy journey, but we must persevere. There may be many incidents where lashing out will seem like the easiest option, but don’t give in. Good sense and sincerity must prevail in wanting to see Malaysia move forward. If we, as leaders, truly care about the good people of our nation, we must take leadership and heal those who are hurt.”

Commenting on the current status of the country’s economy, Mr. Hussein said: “Admittedly, the economy has also taken a hit due to this political uncertainty following the aftermath of the 14th General Elections. Commodity prices are falling, unemployment is on the rise and people are not feeling the boost in their wallets that they were hoping for. Austerity measures and belt tightening only serve as short-term stop gap measures and do not benefit the nation in the long run. I believe that whatever policies implemented today will be only be overshadowed and not have a positive impact on the people until political stability and certainty is restored,” adding, “furthermore, we must not discount the risks involving security surrounding the country, with unwanted forces potentially exploiting our divided society. Threats to national unity, combined with a flagging economy, and security threats serve a potent and dangerous mix for Malaysia’s future.”

On the need to chart a new way forward for Malaysia, Mr. Hussein said: “We must stop and realise – it is now the time to heal. It will take a lot of courage, and decisions made may not be popular – but this is crucial and needs to be addressed and deliberated with sense and not emotion. We must do more to create a nation, which our children and grandchildren will be grateful to be living in. The good people of Malaysia want to see some sense in all this chaos, and they must see these efforts as foundations laid down for a brighter future.”

He added: “We cannot deny that it has to start somewhere, and the Malays have taken a proactive initiative with our own household, but it must not stop there. We must be optimistic in bringing a positive narrative forward, to build on what has been done to include all Malaysians, regardless of race, religion and creed.”

Echoing the chant on Malaysia Deserves Better, the former minister urged his countrymen: “to work patiently, to unite our fractured nation, to heal the divide, and to endure whatever tomorrow will bring.”