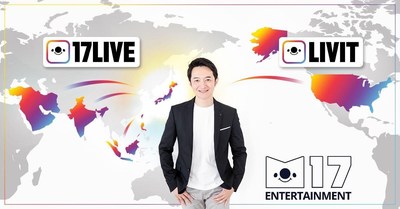 M17 has expanded from its beginnings in Taiwan to now include Japan, Hong Kong, Singapore, Malaysia, India, the United States and the Middle East. With its recent rapid growth in Japan, which is now 17LIVE’s largest market, M17 believes it can pioneer the next evolutionary step in the live streaming industry. Joseph Phua, M17’s chairman and former CEO, said: “I am very excited about Hiro’s transition from Japan CEO to group CEO. Hiro built our Japan business from scratch in 2017. Japan is now our largest revenue contributor while M17 is by far the dominant live streaming player in the market. I am looking forward to M17’s continued growth, both in Japan and internationally, under Hiro’s leadership.”

Hirofumi Ono said, “Back in 2017, I had the challenge to launch the business of 17LIVE in Japan. But I always strongly believed that the future of the live streaming industry would be an exciting one. In the past three years, under Joseph’s strong leadership, M17 has established itself as the No.1 live streaming platform in Japan, across much of Asia and continues to expand its business globally. In 2020, the world is facing unprecedented uncertainty due to the threat of coronavirus. At such a time, I am honored to become the global CEO of M17, and I have strong faith that by working with our global teams we together can lead the company to become the No.1 live streaming platform in the world. We live today in an exciting time thanks to technologies that make live communications possible. Our company’s mission statement of ‘Empower Artists, Entertain the World’ reflects our determination to use these technologies to provide a world-wide stage to our users so they are both empowered and entertained.”

After graduation, Hiro participated in several mobile and media startups. In 2000, Hiro was the founding member and the first employee of CyberAgent Mobile Co., of which he retired in 2008 as Senior Managing Director. In 2008, Hiro co-founded Infinity Ventures, from which he acted as an investor and veteran entrepreneur, to found Rekoo Japan under Sunshine Ranch, Jimoty, Groupon Japan and Farfetch Japan. In addition, he started the “Infinity Ventures Summit”, the largest conference for entrepreneurs in Japan.

Hiro retired from Infinity Ventures and became the global CEO of M17 in July, 2020.

M17 is committed to its mission statement of “Empower Artist. Entertain the World”. Through its live social entertainment platform, all content creators can display their talents and create unprecedented new entertainment. Through the M17 platform, anyone can live stream their talents and passions to our worldwide userbase of over 54 million registered users, as of August 2020.

M17’s group of companies consist of 17LIVE, a real-time interactive and live streaming platform with the largest revenue in the Asian market (excluding China), “MeMe”, which has been developing in India and Southeast Asia for many years, “Wave”, which features talented voices without revealing faces, B2B live streaming and social business SaaS system services, and “HandsUP”/”FB-Buy”, which aim to simplify sellers’ sales process and buyers’ livestream shopping experience on social media.

Glenmark appoints Dipankar Bhattacharjee to its Board of Directors