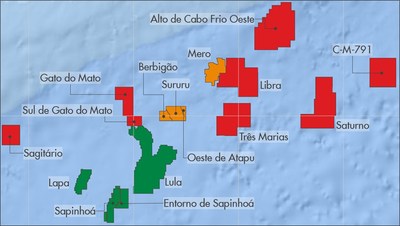 The FPSO will have a capacity to process up to 180,000 barrels of oil per day.  The consortium plans four new production systems to be deployed in the Mero field.  Mero-2 is the second, with first oil expected in 2022.

“Shell is the largest foreign producer in Brazil, which has become a heartland for us.  Mero-2 is the latest in a series of FPSOs that will come online,” said Andy Brown, Upstream Director, Royal Dutch Shell.  “From production to development, appraisal and exploration, we have a full funnel of long-life, resilient growth opportunities in the country, which is home to some of the best deep-water basins in the world.”

As one of Shell’s Core Upstream themes, Deep Water is set to generate robust cash flow for decades to come.  Shell’s global deep-water business has a strong funnel of development and exploration opportunities in Brazil, the US, Mexico, Nigeria, Malaysia, Mauritania, and the Western Black Sea. Production worldwide is on track to reach more than 900,000 boe/d by 2020 from already discovered, established reservoirs.

The companies in which Royal Dutch Shell plc directly and indirectly owns investments are separate legal entities. In this Press Release “Shell”, “Shell Group” and “Royal Dutch Shell” are sometimes used for convenience where references are made to Royal Dutch Shell plc and its subsidiaries in general. Likewise, the words “we”, “us” and “our” are also used to refer to Royal Dutch Shell plc and its subsidiaries in general or to those who work for them. These terms are also used where no useful purpose is served by identifying the particular entity or entities. ”Subsidiaries”, “Shell subsidiaries” and “Shell companies” as used in this Press Release refer to entities over which Royal Dutch Shell plc either directly or indirectly has control. Entities and unincorporated arrangements over which Shell has joint control are generally referred to as “joint ventures” and “joint operations”, respectively. Entities over which Shell has significant influence but neither control nor joint control are referred to as “associates”. The term “Shell interest” is used for convenience to indicate the direct and/or indirect ownership interest held by Shell in an entity or unincorporated joint arrangement, after exclusion of all third-party interest.

We may have used certain terms, such as resources, in this Press Release that the United States Securities and Exchange Commission (SEC) strictly prohibits us from including in our filings with the SEC. U.S. investors are urged to consider closely the disclosure in our Form 20-F, File No 1-32575, available on the SEC website www.sec.gov.