Seoul, April 26, 2022 (GLOBE NEWSWIRE) — The age of play-to-earn (P2E) gaming has been a reality and has steadily been on the rise over the past few years. The introduction of this concept onto the blockchain, deployed alongside non-fungible tokens (NFTs) is something that has increased this appeal to many gamers and investors alike. There are an insurmountable number of new NFT gaming protocols that continue to attract large followings and communities. Legendverse is promised to become one of the more unique monetized gaming experiences out there. 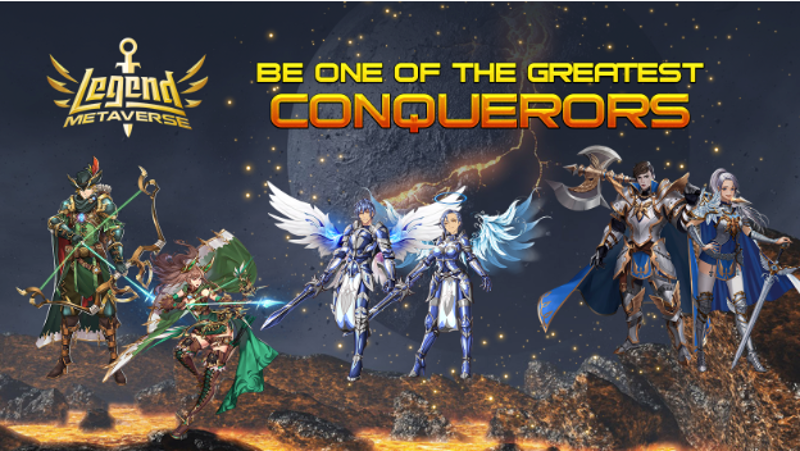 Legendverse is an NFT play-to-earn war game built on Binance Smart Chain and Solana. The gameplay is focused on giving players a fair share of adventures, missions, and battles that follow a fascinating storyline. Players go on missions to explore the Legendverse and interact with the different races living in the Legendverse. Different races have unique NFTs which players may gather during their journey to help them fulfill tasks and get through challenges.

Strategies and creativity go play a key role in determining the destiny of the gathered Heroes; the storyline may benefit the player and keep their heroes exposed to mysteries and treasures in the metaverse. Players compete against one another in the Legendverse. In a game mode developed for bounty hunters, Legend’s greatest fighter players battle against one other to get prizes.

The gaming navigation is designed in a turn-based format, with a role-playing game aspect (RPG) that distinguishes it from other game products in the same category. It offers a diverse skill set that allows users to experience the thrill of a Blockchain combat game. The player against environment and player versus player game types are both exciting, and players’ participation in the Legendverse is rewarded; play-to-earn.

Ownership: The Hero warriors and gear in the game will be securely stored on the blockchain in the form of NFTs.

Marketplace: With this feature, players buy/sell or trade rare warriors and items for profit.

Floor Price: An innovation function bringing guaranteed liquidity for the NFT & can stack up its value over time through trading & other gaming activities.

War Game: Players will train warriors, equip them with the most suitable items and skills to be able to join the War Game.

Legendverse has exquisitely digital assets created using blockchain technology. Each collectible is matchless, genuine, and varies depending on its rarity. Legendverse has six classes including human, angel, demon, elf, dragon, and fairy which are waiting for the players to discover and collect. Besides, Legendverse believes in the future of Blockchain technology and strives to build a secure gaming economy with long-term potential.

Humans: Humans constitute a big faction of the Legendverse. Humans might not be as powerful as Demons or as intelligent as mischievous Elves. But they still play an important role in the victory over the demon lord thanks to a mix of military strength and technological development. That’s why Humans are an irreplaceable faction in Legendverse.

Angels: Angels are The Creator’s guardians. They are the mightiest beings that ever existed. After the Great War, they just vanished. Some say they went extinct, others say they had done their duty as saviors of the land and went back to Heavens Isle.

Dragon: Dragons are rare, and have not been seen by many. Stones from time immemorial have records of a half-blooded dragon tribe, with massive strength and wisdom believed to come from the gods. These creatures as legends have it are mythical creatures and evolved to have similarities with humans to help them adapt to the new environment. Elemental oats, Infernal Assault, and Seal of elements.

Demons: Demons crept into the world trying to infiltrate the races to find a way to steal the magic crystals in order to bring back the demon lord to take over the world again. Demons can improve their strength and ability by killing more and more and blood-drinking so that their dark magic will become stronger. The Demon’s power will increase many times especially after killing small, weak species like the humans.

Fairy: they are small-sized beautiful magical creatures that tend and protect flowers. They can’t be underestimated because of their sizes, they could freeze or fasten time. To maintain their beauty, they capture the hearts of species that deeply admire them or are moved by their beauty. Eclipse, Beam of the Moon, and Spell of Elements.

Elf: Elves – the spirits of the deep forest. They themselves are magical creatures. They can control magic, revive plants and animals, and heal wounds. Elf tears are a special catalyst to create magic weapons. Their weapons are usually small bows and long swords. Elves’ notable products are sophisticated weapons that carry magic.

Dragon: Not many have seen the Dragons. Some of the stones engraved the existence of a half-blooded dragon tribe with invincible strength and the wisdom of Gods. Legend has it that their ancestors are mystical creatures who later evolved to have a similar appearance as humans in order to adapt to their new environment. Their craving desire for Power is always above all others.

Fairy: Fairies hold the magic of nurturing and protecting flowers. Despite their small size, their magic should not be overlooked. Holding the secret of time, they have the ability to stop or accelerate the flow of time. After the Great War, they vanished into the depths of the woods.

LEGENDVERSE Token
Legendverse features its own token called $LGC. It is a game-based reward for Legendverse players, and it appears as a gem in the game. The floor price for NFT Heroes will be computed in BNB. Trading and other gaming activities will raise the price of NFT Heroes. The native token is critical to the platform’s transactional capabilities. It also allows players to purchase NFT characters and improvements, giving them the ability to increase their battle performance.

ROADMAP
Because the viewing angle and images are fairly familiar, players will have no trouble approaching and getting acclimated to the Legendverse gaming interface. The project is also separated into 8 phases so that the best characteristics may be highlighted:

Phase 1 and phase 2: introducing different types of characters, which allows users to progressively gain access to and purchase basic equipment.

Phase 3: allowing users to buy and/or sell equipment on the marketplace and equip their heroes with different kinds of equipment including: Weapon, Headgear, Amor, Boots, Pants, Gloves, and Pet.

Phase 5: including the start of Hero DUEL Arena (Turn-based Combat), the launch of its Android & IOS versions, and troop recruitment & mounting.

Phase 6: being characterized by a Gameplay upgrade and Worldmap opening, which will release more exciting game features and earning opportunities to players.

Phase 7: releasing the minimap, mining, and pet system and guild combat and clan fights will be added.

Phase 8 : Players can apply for jobs and become landlords.

In particular, Legendverse has a risky strategy that few others do: it focuses on the mobile version. Legendverse, an Android and iOS game, will be released. Legendverse  is expected to attract a large number of gamers on mobile devices as a result of its quick accessibility and large user base, thus driving up the price of $LGC tokens.

NFT is considered to be a big digital revolution in blockchain technology. LEGENVERSE inventors expect to fundamentally change people’s perceptions of NFTs by combining technology, entertainment, art, aesthetics, and income prospects into a captivating experience for users.