JERUSALEM, Dec. 10, 2019 /PRNewswire/ — Today The Genesis Prize Foundation (GPF) announced Natan Sharansky, the legendary advocate for freedom, democracy and human rights, as the 2020 Genesis Prize Laureate. In choosing Sharansky from a list of 250 nominees, the Selection Committee noted his extraordinary lifelong struggle for political and religious freedoms, emphasizing the relevance of his work in today’s world. 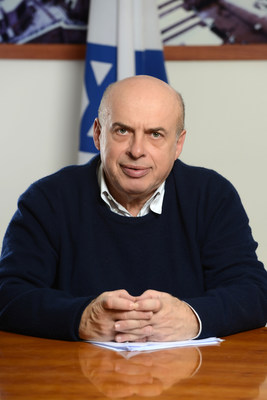 “Natan Sharansky is one of the great human rights advocates of our lifetime,” said Stan Polovets, Co-founder and Chairman of The Genesis Prize Foundation.  “At great personal sacrifice, he fought for the rights and dignity of all ethnicities, religions and nationalities. Today, as we witness democratic principles being challenged and human rights, along with freedoms of thought and expression, denied to so many, Natan’s example is an inspiration to all those struggling for democracy. While this is particularly true in parts of the world under authoritarian rule, even in democracies our freedoms cannot be taken for granted. Natan’s ideals and vision are as relevant today as they were in the 1980’s when he took on the totalitarian Soviet regime – and won.”

Sharansky is the sole living non-US citizen to receive both the Congressional Gold Medal and the Presidential Medal of Freedom. Mother Teresa, Nelson Mandela, and Pope John Paul II were the only other non-Americans to receive both honors.

The annual Genesis Prize honors extraordinary individuals for their outstanding professional achievement, contribution to humanity, and commitment to Jewish values. In line with the tradition established by previous recipients of the Prize, Sharansky has chosen to forgo the $1 million award, and GPF will donate the funds in his honor to nonprofit organizations to be selected at a future date.

Michael Bloomberg said: “Congratulations to Natan Sharansky on winning this year’s Genesis Prize. After being imprisoned in a Soviet gulag for nearly a decade, he has devoted his life to advancing and protecting human rights around the world. His values and ethics, rooted deeply in his Jewish faith, have served as his moral compass — and his life has been a beacon to so many who dream of freedom.”

Tony Blair, former Prime Minister of the United Kingdom, said: “Natan Sharansky is a hero, whose courage united people all over the globe in a quest for freedom. He is a distinguished leader who made a significant contribution to the State of Israel, to the people who lived in oppressed societies of the Soviet bloc nations, and to humanity as a whole. I congratulate Natan on this prestigious global award.”

Natan Sharansky first gained global renown in the 1970s as a leader of the Soviet dissident movement, where he worked alongside Nobel Prize Laureate Andrei Sakharov, demanding that the USSR live up to its international human rights obligations. Arrested for his challenge to the Soviet regime, he spent nine years incarcerated as a Prisoner of Conscience – much of it in solitary confinement –refusing to disavow his demands for respect of human rights for all oppressed people of the Soviet Union.

Unbroken, Sharansky was released in 1986 following an intense international pressure campaign, spearheaded by his wife Avital. His release became the symbolic prelude to the unraveling of the communist regimes throughout the Soviet bloc in the late 1980’s.

Since moving to Israel, Sharansky continued his activist work and emerged as an influential political thinker. He authored three best-selling books, making the case for freedom, democracy and human rights. During his time in government –including as Deputy Prime Minister – and as the head of the Jewish Agency for Israel, Sharansky fought tirelessly for the rights of new immigrants, religious minorities, and women. At the helm of the Jewish Agency, he focused on repatriation of Jews to Israel, strengthening the links between Israel and global Jewry, and made an effort to develop separate, egalitarian prayer space near the Western Wall.

Natan Sharansky said: “I am humbled by this honor and thank the Genesis Prize Foundation for recognizing my work to promote democracy, rule of law, and human rights. As my personal hero President Ronald Reagan said, freedom is never more than one generation away from extinction. It is not passed to our children in the bloodstream. It must be fought for, protected, and handed on for them to do the same, or one day we will spend our sunset years telling our children and our children’s children what it was once like to live when men were free.”

Natan Sharansky will be honored at the Genesis Prize Ceremony in Jerusalem on June 18, 2020.

The Genesis Prize is a global award that celebrates Jewish achievement and contribution to humanity. Launched in 2013, the Prize is financed through a permanent endowment of $100 million established by The Genesis Prize Foundation.

All laureates have selected causes that are important to them, and award funds in their honor have been donated to these causes. These initiatives have included support of social entrepreneurship based on Jewish values, inclusiveness of intermarried families in Jewish life, improving the lives of individuals with special needs, helping to alleviate the global refugee crisis, advancing women’s equality, and combatting anti-Semitism and efforts to delegitimize the State of Israel.