NEW DELHI, Aug. 31, 2019 /PRNewswire/ — HCL, a leading global conglomerate, today announced the successful completion of the HCL 11th Indian Junior Open. The six-day tournament that started on 26th August was hosted at the Jaypee Greens Sports Complex in Greater Noida. A total of 369 players from 11 countries including United States, England and Hong Kong participated in the Championship. The winners of the tournament were felicitated by Shahzar Rizvi, a top Professional Indian Shooter and a Gold medallist at the 2018 ISSF World Cup and in the 2017 Commonwealth Shooting Championships. 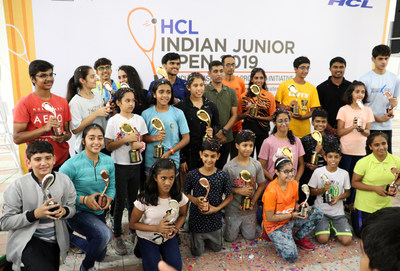 This event was a six-star tournament under the Squash Rackets Federation of India (SRFI) calendar and a Platinum event under the Asian Squash Federation circuit. The top players from this tournament will receive ranking points, which will add to their junior Asian rankings in the relevant age group. The 11th HCL Indian Junior Open was organized under the HCL Squash Podium Program – a joint initiative by HCL and SRFI that aims to transform the Squash ecosystem in India.

Speaking about the tournament, Sundar Mahalingam, Chief Strategy Officer, HCL Corporation and Shiv Nadar Foundation said, “I would like to congratulate the winners on their extraordinary performance and all the other players for putting forward a competitive game. HCL’s philosophy of touching lives is reflected in the initiatives it undertakes to promote sports in the country. Through sports, we want to create platforms that help young players excel but more importantly, we want to raise the level of enthusiasm surrounding lesser known sports like Squash. I would like to wish all the players best of luck for their upcoming tournaments.”

The Championship was played in a knock-out format across all categories. Here are the details of the winners and runners up.

Founded in 1976 as one of India’s original IT garage start-ups, HCL is a pioneer of modern computing with many firsts to its credit, including the introduction of the 8-bit microprocessor-based computer in 1978 well before its global peers. Today, the HCL enterprise has a presence across varied sectors that include technology, healthcare and talent management solutions and comprises three companies – HCL Infosystems, HCL Technologies and HCL Healthcare. The enterprise generates annual revenues of over US $ 8.9 billion with more than 143,000 employees from 140 nationalities operating across 44 countries. For further information, visit www.hcl.com

On behalf of HCL: