LAURENT GARDINIER, NEW PRESIDENT OF RELAIS & CHÂTEAUX, ELECTED ON NOVEMBER 14, 2022, IN VENICE, AT THE 52ND ANNUAL CONGRESS OF THE ASSOCIATION

It’s official: Laurent Gardinier has been named successor to current president Philippe Gombert. He will take over the role on January 1, 2023 following a six-week handover.

The new President: reaffirming our commitments

PARIS, Nov. 17, 2022 /PRNewswire/ — Laurent Gardinier, a co-owner, along with his brothers, of Relais & Châteaux Domaine Les Crayères in Champagne, and of Parisian restaurant Le Taillevent, currently represents the association as National Delegate for France and has served as a member of the board of directors for 17 years. As President, as well as honoring the commitments of his predecessor, he will be dedicated to serving our member properties and enhancing the solidarity of the Relais & Châteaux association and the fundamental values it embodies. Assisted by an experienced, complementary management team that shares his ambitions, he will ensure the democratic vitality of the Association while giving teams clear, balanced and ambitious development and performance objectives. 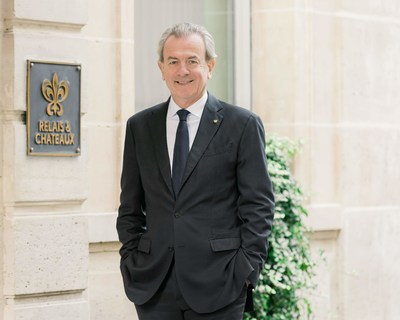 “I am focused on three main areas: reducing our environmental footprint with economically realistic solutions; preserving biodiversity, working in particular with our chefs; and enhancing respect for each of our employees and increased social responsibility; all while maintaining the financial health of our association,” said Laurent Gardinier.

Philippe Gombert, who was elected as President in November 2013 and has served two successive terms. He will remain active within the association, as Honorary President, a member of the Commission Network, and as co-owner, with his wife Stéphanie, of the Château de la Treyne in the Dordogne – a member of Relais & Châteaux since 1992. During his governance, on November 18, 2014, he presented an ambitious vision for the association to UNESCO, pledging to ‘make a better world through food and hospitality’ and to ‘elevate the fine art of living’. This vision, drawn up with Olivier Roellinger, Vice-President of Relais & Châteaux, and in collaboration with our chefs, defines the arts of hospitality and cooking with respect for the future of the land and its people, taking into account the uniqueness of its 580 independent properties spread across 65 countries.

“I am very optimistic for the future of Relais & Châteaux. Between the Executive Committee, the Management Committee and their teams, the association is in good hands. Our civilization, our world, is at a fundamental turning point, but Relais & Châteaux has the right people and the right tools to adapt, evolve and advance with it,” said Philippe Gombert.

Laurent Gardinier has formed an Executive Committee to ensure the governance of the Association. It has eight members, including four new ones, and is comprised of five men and three women:

In addition, the existing management team in Paris will further support Laurent Gardinier. The team consists of:

Relais & Châteaux, established in 1954, is an association of 580 unique hotels and restaurants throughout the world, owned and operated by independent entrepreneurs – most often families – who are passionate about their craft and deeply committed to forging warm, lasting relationships with their guests. Established on five continents, from the Napa Valley vineyards to Provence to the beaches of the Indian Ocean, Relais & Châteaux invites people across the globe to savour delicious journeys, to discover the inimitable art de vivre engrained in each local culture and to share an incomparable, unforgettable experience. Relais & Châteaux members protect and promote the wealth and diversity of the world’s culinary and hospitality traditions, to ensure they continue to thrive. They are equally dedicated to preserving local heritage and the environment, as articulated in the association’s Vision presented to UNESCO in November 2014.