MUMBAI, Dec. 16, 2019 /PRNewswire/ — The much awaited period drama Panipat had a special screening hosted by Rohit Shelatkar, Founder of Vision World Films, Director Ashutosh Gowariker, and Co-Producer Sunita Gowariker of AGPPL last evening in Juhu. Marking her special presence, Ms. Sarayu Sumanvar, the great grandniece of Late Dadasaheb Phalke – the father of Indian cinema – was also present to give her blessings and best wishes to Rohit and the entire team of Panipat. 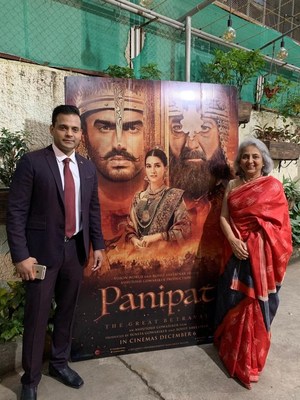 The evening also witnessed the star cast – Arjun Kapoor, Kriti Sanon, director Ashutosh Gowariker along with Sunita Gowariker receiving applauds from guests for their performances and contribution to the magnum opus.

Elated at the phenomenal response to the screening, Mr. Rohit Shelatkar, Co-producer and Founder of Vision World Films, said, “It was a delight and an honor to have Ms. Sarayu Sumanvar grace the screening. I am grateful to have a team including our beloved Ashutosh and Sunita with Arjun and Kriti who have brought together our powerful and legendary history in one cinematic creation, and showcase it to a diverse audience. I have always admired the valour, courage and brave history of Marathas, and am glad to seek wishes from the first family of cinema for the same.”

The historical film depicts valour, courage and bravery of the Marathas during the war against the Afghans 250 years ago to protect the nation. A special focus was on research, costumes, sets, war scenes, jewellery, and the overall grandeur of the movie, to bring alive, the story of Panipat on the silver screen.

Rohit Shelatkar, founder of Vision World Films is a brilliant modern thinker with deep understanding of Indian art, cinema, culture and music. He, envisions to give Indian cinema, a contemporary touch in the backdrop of the glorious past history, valour, love and struggle. He believes, that while we are racing ahead of 20th century, our glorious past must be showcased in a palatable manner. He desires to be the change Indian viewers want to witness in the entertainment arena. Vision World Films would be working with the biggest names of the Indian film industry; at the same time would be a doorway to many current unsung heroes and new-comers whose talent is yet to be explored. Looking ahead, Mr. Shelatkar is determined to achieve the goals of placing Indian cinema on the global map.