With soy sauce being used in nearly 90% of processed foods globally, institutional customers in India will require this all-purpose seasoning

MUMBAI, India, Nov. 7, 2022 /PRNewswire/ — Soy sauce is not only used in Japanese or Asian dishes but also in over 200 cuisines around the world. Perhaps less well-known is the fact that it is a key ingredient in processed food. According to a recent Innova Database report which covered information about new products and ingredients from 90 countries, soy sauce as an ingredient is used in nearly 90% of all processed food categories in around 70 countries. 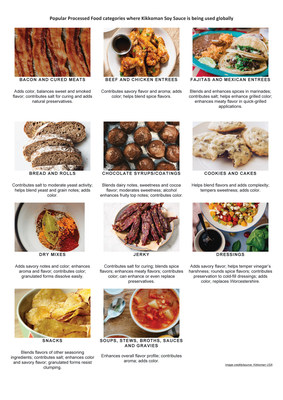 According to a recent Euromonitor report, one of the key trends in the food industry globally is ‘convenience’. Consumers have moved towards more ‘ready to eat’ products. In 2021, the Ready Meal market in India showed an increase of 16%, reaching a market size of INR 13.1 billion. In 2026, this figure is expected to surpass INR 24.2 billion.

Kikkoman Soy Sauce’s versatility has made it a key ingredient in many food categories – it can be used as a cooking ingredient, marinade sauce, base seasoning for vegan products, natural flavour enhancer for soups, salads, frozen pizza, spreads, ready meals for children and even to make vanilla ice cream more delicious.

To this end, Kikkoman India has created a dedicated sales team so that food manufacturers embracing this new trend can use Kikkoman Soy Sauce in their products, secure in the knowledge that their ready meals and other processed foods will be more natural and delicious.

Kikkoman’s journey in India has already been marked by initial success. It has made deep inroads into the hospitality industry. In just 18 months since its launch, the high-quality and superior taste of Kikkoman Soy Sauce has seen steady sales growth in over 30 cities through its authorised distribution network.

Many chefs have already switched to using Kikkoman for the deliciousness it adds to dishes owing to its natural brewing method and just four basic ingredients: soybeans, wheat, salt, and water. The impact it is having can be gauged from the fact that 18 million dishes* were served using Kikkoman Soy Sauce in India in the first year of its launch.

“Leading food manufacturers around the world are using naturally brewed soy sauce to enhance the flavour profile of their product and as an alternative to salt. Kikkoman is the leading producer of naturally brewed soy sauce in the world, and we use the traditional brewing method “honjozo”, giving rise to amino acids and other umami components which add more complexity and depth to the flavour, adding sweetness and savoriness in addition to saltiness. Just like spices, adding Kikkoman Soy Sauce elevates the dish, and makes it more delicious,” said Kikkoman India Director and India Representative Harry Hakuei Kosato.

*The figure is derived from the number of ‘Manchurians’ – the favourite Indian Chinese dish – that were made, as shown by Kikkoman’s research. The total amount of Kikkoman Soy Sauce sold is divided by the amount of soy sauce typically used in this dish.

CaratLane Records 109 Percent Growth in EBIT in Q2, Despite Dip in Overall Customer Sentiment for the Category

HarperCollins India is proud to announce the release of STRATEGIC CHALLENGES India in 2030, Edited by Jayadeva Ranade