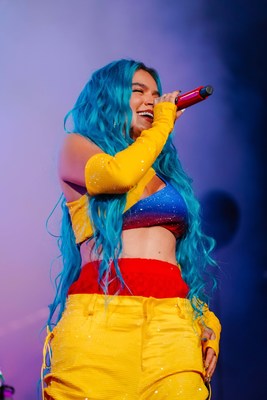 As she took the stage, Karol G was greeted with a warm welcome from attendees who euphorically danced to the beat of her songs. With a high-caliber production that was full of colors, light shows and dazzling choreography, the artist not only raised the energy at the festival, but also intimately connected with everyone present. The stage provided an immersive experience that transported fans to the streets of a Latin neighborhood, which was created as an homage to Latin culture and was accompanied by a band with traditional instruments of Latin music.

During her show, Karol G took viewers on a trip of some of her biggest hits, such as “El Makinón,” “Mi Cama,” “Bichota” and “Ahora Me Llama,” as well as “El Barco” and “200 Copas.” As part of her tribute to Latin culture, she also presented a captivating medley of some of the most iconic classics in Latin music including “La Bamba,” “Como La Flor,” “Maria,” “Macarena,” “La Vida Es Un Carnaval,” “Gasolina,” “Hips Don’t Lie,” “Despacito” and “Mi Gente.” Further elevating her spectacle, she welcomed Tiësto to the stage to sing “Don’t Be Shy” and then invited multi-platinum artist Becky G to perform their latest collaboration, “MAMIII.” Finally, she closed out her show with a flourish, presenting her global success, “Tusa.”

Karol G’s participation in Coachella undoubtedly represents an extremely important milestone for her career, which further demonstrates her artistic growth. In addition, through her presentation, the artist delivered an inspirational message that celebrated Latinos and united international audiences regardless of cultural and language differences. Meanwhile, Karol G continues to prepare for her second Coachella performance that will take place next Sunday, April 24.

The finalists of the Scent of Speech competition are set to win the $3.2 million prize