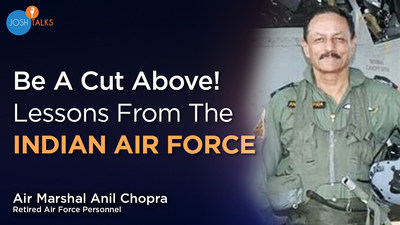 The Indian Air Force video series is the second phase of Josh Talks’ ongoing partnership with the Indian Defence Services, launched in 2018 with ADG-PI (Indian Army) to showcase the untold stories of the Army officers. Both the Indian Army and Air Force are an epicentre of extraordinary stories of high adrenaline action, courage and bravery with officers associating great pride and honour to their association with the profession. Often, their journey and sacrifices go unnoticed in the public domain and their wealth of lessons, untold. Josh Talks aims to bring these stories to life and inspire the Indian youth to consider Indian Defence services as a viable career option. Some of the earlier videos showcased on the platform include talks by Paramvir Chakra Yogendra Yadav, Col. DKS Sharawat, Lt. Gen. RR Nimbhorkar (Retd.) and Col. Sunil Prem (Retd.)

Veterans and multi-disciplinary members of the Force will be featured in these series who will be sharing their on-the-field experiences and the talks would be released on Josh Talks’ YouTube platform targeting youth and urging them to be a part of the IAF family.

Link to the video – https://youtu.be/LVY1N6oeMik

Commenting on the partnership, Supriya Paul and Shobhit Banga– Director & Co-Founders, Josh Talks, said, “Our Indian Air Force is the 4th largest in the world, just behind USA, Russia and China and is a goldmine of opportunity as a dignified and prestigious career option. Josh Talks is privileged and honoured to be associated with the Indian Air Force, a glorious and timeless institution to bring inspiring stories of their officers closer to the youth of India. We are rooted in the ethos of nation building through engaging and encouraging our youth towards making the right choices for themselves and their communities. Our ongoing partnership with the Indian Defence Services give us an opportunity to shine the spotlight on authentic individuals who have bought honour to India and encourage the younger generation to view this profession as a highly fulfilling one.”

A senior representative from Indian Air Force, shared his views on the partnership, “Our aim is to inspire the youth to consider Indian Air Force as a career, one that is not run of the mill like a regular 9 to 5, which is immensely exciting and fulfilling. We chose Josh Talks to convey the experiences by real people which are important for the youth to recognise and relate to. With their unique youth outreach programmes, Josh Talks has earned a repute of being one of India’s most authentic and credible storytellers and we hope to leverage their expertise to highlight the glory and bravado associated with life in the IAF.”

Josh Talks has previously collaborated with the Indian Army in an interactive series titled ‘Lessons from The Indian Army’ where senior army officers spoke about the lessons they learnt from tenure in the army and how services have helped them manage hurdles in life – both personal and professional. These videos garnered over 5 Million views. To view the videos, please visit – https://www.joshtalks.com/all-topics/army-officers/

Josh Talks, started in 2015, is an impact media platform with a mission to unlock human potential. It aims to build an ecosystem that helps the youth of India to go from where they are in their lives to where they aspire to be. There are some common challenges faced by the youth, which includes a lack of access to relatable role models, limited resources in vernacular languages for career guidance and a lack of re-skilling and soft-skilling programs at scale.

Co-founded by Shobhit Banga & Supriya Paul, Josh sought to bridge these gaps by inspiring, informing and upskilling the youth of India through its various offerings such as Josh Talks, Josh Kosh and Josh Skills. Josh Talks also works with government bodies, association and corporates to create skill-based models and activate them through on-ground training and workshops. Given their work portfolio, they have been recognized amongst the ‘Top Start-ups’ in the country.

Breast Cancer: Hormone Therapy Has a Bigger Impact Than Chemotherapy on Women's Quality of Life - Research by Institut Gustave Roussy