HYDERABAD, India, Nov. 14, 2019 /PRNewswire/ — IndiaJoy Festival www.indiajoy.in has become one of the most important platforms in the world for digital, media and entertainment Corporations to collaborate and to innovate. 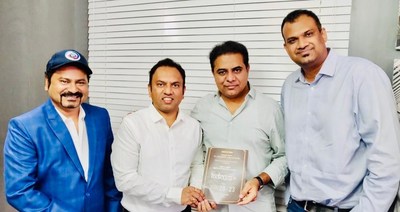 With more than 10,000 visitors, the four-day conclave IndiaJoy 2019, being held at HICC from 20-23rd November, is expected to serve as a springboard for Indian media and entertainment companies on the world stage.

The spotlight for this year will be on the Indian Media and Entertainment (M&E) industry which is poised to touch INR 1,631 billion according to a recent market report on the back of rapid growth in digital user base and consumption, combined with growing regional demand and monetization.

The 400+ International delegation from 50+ countries expected to attend the event will boost Hyderabad’s visibility in the global VFX, Toons, Gaming and Entertainment industry, while exploring the huge India market as well as markets in Southeast Asia and other emerging markets.

The government is keen to help the Visual Effect, Gaming and Animation Industry so it is gearing up to show up Hyderabad and Indiajoy Festival to demonstrate the local talent creativity and soft power.

Speaking about the growth of AVCG Industry in Telangana, KT Ramarao, IT Minister, Government of Telangana, said, “Government of Telangana has been supporting a variety of economic and industrial activities by initiating specially designed policies to promote growth. While Telangana has been a leader in the area of IT/ITeS, a push to the Film, Content, Digital, Animation, VFX, Gaming & Comics industry supported by a futuristic policy will ensure exponential growth of this industry and attract investments from related stakeholders into Telangana. This will establish Telangana as a truly creative industry hub. By organising a mega event like IndiaJoy makes lot of strategic sense for the government.”

Speaking to media about the event, Jayesh Ranjan, Principal Secretary Government of Telangana, said: “The IndiaJoy festival is a window for the world to witness and to engage with the finest minds in gaming, VFX, and animation industries in India. The Government of Telangana is committed to make this a global scale platform. We are pleased to note that in its second year itself, the event is becoming bigger, with global participation from investors, publishers and gamers who are all excited to attend IndiaJoy.”

Speaking about Desi Toons at IndiaJoy Festival, Rajiv Chilaka Preside of TVAGA and the Founder of Greengold Animation (Chota Bheem fame), said, “The Indian animation industry is at a very interesting and crucial juncture. In the last couple of decades, India has proven its caliber in creating shows and IPs which are forces to reckon with globally. Of course, the journey has just begun for all of us. With endless possibilities, the future will be demanding but very fruitful. With Desi Toons we hope to provide the stage to better understand where we stand and where we are headed.”

Sridhar Muppidi, Co-Founder at PurpleTalk, highlighted the tremendous learning and collaboration opportunities IndiaJoy offers to delegates, and added: “I am excited about this year’s IndiaJoy edition, which is bringing together 250 sessions on 20 different topics, 8 top events, 4 days of expo, and a large esports arena with 5 different game stages.”

Sharing his insights about VFX summit Madhav Reddy Yatham (Mike) General secretary of TVAGA and the founder of Rotomaker VFX, said, “We are pleased with the tremendous response from the global fraternity expressing their interest to be a part of this event.” Amid panel discussions, VFX showreels, breakdowns, and illuminating discussions, the event is poised to bring under one marquee, top industry veterans, artists and VFX technicians of the most notable VFX projects including techie-talks from Unity, Auto Desk and so on.

Stalwarts of animation production and media industry with the likes of Turner International, Viacom18, Sony Pictures Networks, Discovery Communications, Shemaroo, VOOT, DQ Entertainment, Green Gold Animation, Reliance Big Animation and Hi-Tech Animation among others as Executive panelists and speakers will share their perspectives on the growth, scope and future of the Indian Animation industry.

The OTT Pulse being held on 20 November will have multiple panels and keynotes spread over the day which will include representation from the leading digital platforms. Taking the stage will be panelists from leading OTT platforms like Amazon Prime Video, Viu, VOOT and ZEE5 among others.

The flagship event of IndiaJoy, Indian Game developer Conference(IGDC) on to its 11th edition has emerged as the most productive platform for investors, publishers and gaming companies to engage and learn from each other. IGDC 2019 has seen a record 100% growth in the number of global and local investors and start-ups. IGDC will also an expo for gaming companies across India including their popular IGDC Awards ceremony in 7 categories.

Additionally, over 1000 attendees are expected to attend InfluencerCon to attend 30+ speaker sessions, workshops, informal interactive sessions, and more. The event will host B2B and B2C Expo Stalls in addition to top brands and influencer platforms.

Overall, this year’s IndiaJoy has something for everyone-students, start-ups, game developers, game publishers, and film media and entertainment professionals.

This Year for the first time IndiaJoy will also have Global Youth Program in partnership with GlobalOpz. This program has already received 1200+ applicants from over 112 countries and more than 60 youngsters from 52+ countries were given a chance to be a part of the program.