CHANDIGARH, India, Oct. 19, 2022 /PRNewswire/ — “There is huge demand of Indian professionals amongst the US Companies especially in the field of Science & Technology,” says Taranjit Singh Sandhu, Indian Ambassador to US. 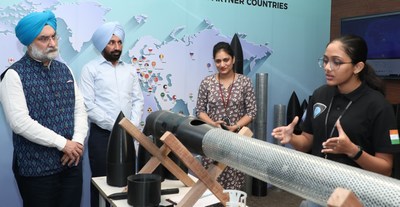 “We made the US Officials realize the importance of Indians who go to United States specially the professionals in the field of Stem (Science, technology, engineering, and mathematics) who bring value and competitive edge to them. About two third of the total Indians who travel to the US on various type of visas belong to the field of science and technology,” said Taranjit Singh Sandhu, Indian ambassador to US while replying to the question of the long US visa delays problem. Indian High Commissioner at US was speaking during his visit to the campus of Chandigarh University, Gharuan.

Sandhu further added that, “After the issue of visa delays was taken up by External Affairs Minister Dr. S. Jaishankar with his counterpart during his recent visit to US, the situation has started improving. In a recent information released by US ambassy in India, more than one lac appointments of H and L workers has been recently released and with this waiting time for US visas will drastically come down for the Indians.”

“The Indian professionals are in great demand amongst the US Companies because they have excelled in the field of STEM (Science, technology, engineering, and mathematics),” added Sandhu.

He further said that, “Young universities like Chandigarh University should create specialised domains such as space technology, information technology, agriculture, mathematics and other areas where the expertise of Indians have been acknowledged at global level. This will create a space where international students can be attracted from all over the world to come and study in India.” While giving details about US students coming to India, Indian Ambassador to US said, “Recently the US Department of State has launched Gandhi-King scholarship exchange initiative under which number of US students can come and study in India. This scholarship also allows the faculty to visit Indian universities under the exchange programs and joint research initiatives.”

Under the importance of New Education Policy, Ambassador Sandhu said, “Indian universities should reach out to international universities for various initiatives such as setting up of offshore campuses of global universities at the existing campuses at Indian varsities. Campus to campus relations, twin programs and joint research initiatives are some of the key areas which needs to be addressed by the Indian universities to work upon globalisation of Indian education.”

While replying to the question of global standing of India, Taranjit Singh Sandhu said, “The global image of India has improved under the leadership of Prime Minister Shri Narendra Modi, as many global leaders have approached our Prime Minister to resolve international issues including establishment of peace and stability in the world.”

He further added that, “There is yet another dimension of Indian presence at global level, where through its state of the art technology, Indian has managed to become a manufacturing hub in various spheres specially in the field of medicine and healthcare. During the recent pandemic, India not only was amongst the first few nations, which produced their own vaccines, but India emerged as a global manufacturing hub of Covid vaccines for other nations. Currently, there are three US vaccines for Covid – 19, which are being produced in bulk in India, and that resulted in providing the Covid vaccination to poor countries like Africa, Latin America, Indo – Pacific countries at a reasonable price. Understanding its global obligations, India also supplied Covid vaccination to more than 100 countries under its ‘Vaccine Maitri’ program. All these efforts have improved the global positioning of India and now, the world looks with hope and positivity towards India whenever there is a global crisis.”

Satnam Singh Sandhu, Chancellor Chandigarh University said, “It’s a matter of great pride that a Punjabi is representing India at United States as an ambassador. We interacted with the Indian ambassador about the possibilities of the collaboration with US universities under the New Education Policy, that can help our students to attain global exposure. We also apprised the Indian ambassador to US about the current 30 + collaborations of Chandigarh University with the reputed US universities and colleges.”

Chandigarh University is a NAAC A+ Grade University and an autonomous educational institution approved by UGC and is located near Chandigarh in the state of Punjab. It is one of the youngest universities in India and one of the only private universities in Punjab to be honoured with A+ Grade by NAAC (National Assessment and Accreditation Council). CU offers more than 109 UG and PG programs in the field of engineering, management, pharmacy, law, architecture, journalism, animation, hotel management, commerce, and others. It has been awarded as The University with Best Placements by WCRC.