NEW DELHI, March 17, 2020 /PRNewswire/ — Observing that India accounts for around four per cent of the global e-waste generated annually that is becoming a major health hazard, a leading voluntary body has strongly argued for responsible management and disposal of loads of electronic waste to ensure their sustainable consumption. 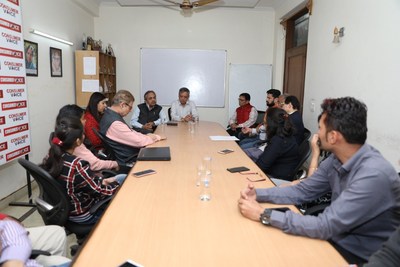 Consumer Voice, a voluntary organisation that works under Ministry of Consumer Affairs to safeguard the health of consumers, underscored this fact on World Consumer Rights Day, which is observed every year on March 15th. The theme for this year was ‘The Sustainable Consumer’.

On the occasion, Consumer Voice organised an expert session focusing on e-waste disposal and management in association with Toxics Link, an organisation working towards awareness of e-waste and chemical toxics for environmental justice and freedom from toxins.

Mr. Ashim Sanyal, COO, Consumer VOICE, said, “Sustainability is the major concern around the world that needs to be addressed. In India there is a huge need for responsible disposable of waste as well as awareness about it.”

Citing a report of ASSOCHAM-KPMG on ‘Electronic Waste Management in India‘, he pointed out that India accounts for roughly four per cent of e-waste generated annually in the world. Computer equipments account for almost 70 per cent of e-waste followed by telecommunication equipments – phones (12 per cent), electrical equipment (8 per cent) and medical equipment (7 per cent) with the remaining coming from household e-waste.

Mumbai topped the list as it generated an estimated 1,20,000 tonnes of e-waste annually, followed by Delhi and Bengaluru with 98,000 tonnes and 92,000 tonnes, respectively. Around 70 per cent of heavy metals found in landfills are accounted for by e-waste.

The report points out that since 2018, India has generated more than two million tonnes of e-waste annually, and it also imports huge amounts of e-waste from other countries.

Mr. Satish Sinha, Associate Director from Toxics Link, graced the occasion as an expert at the session, attended by professionals from diverse areas. “As a responsible consumer we all have to contribute towards responsible disposal of e-waste and must demand for the rights which are not in existence, particularly in India, such as right to repair,” he said.

He also stressed on the need for a regulation to tackle the problem of e-waste disposal, thus contributing towards a sustainable future.

Mr. Sinha gave several examples from industries such as electronics and automobiles while dealing with the problems of e-waste in India, and also explained about the rules and role of various authorities such as Central Pollution Control Board (CPCB) and Regulations of Ministry of Environment along with consumers responsibilities.

Electronic waste, abbreviated as ‘e-waste’, is a term used to describe old, end-of-life electronic appliances such as computer, laptop, TV, radio and refrigerator, which have been discarded by users. E-waste is a cocktail of toxins like mercury, lead, cadmium, arsenic, and beryllium or brominated flame retardants that are hazardous to human health and the environment if not recycled using state-of-the art technology.

Managing E-waste is crucial for sustainable development. E-waste which is becoming a huge public health issue needs to be addressed immediately.In order to separately collect, effectively treat, and dispose of e-waste, as well as divert it from conventional landfills and open burning, it is essential to integrate the informal sector with the formal sector. Along with competent authorities engaged in disposal & management of e-waste, consumers also need to contribute towards the reduction & responsible disposable of e-waste.

Is a Voluntary Action Group of Academicians, Professionals and Volunteers who work relentlessly to raise awareness amongst Indian consumers about their own Consumer Rights and the governing Consumer Laws. Consumer VOICE provides independent and unbiased reviews of food items, consumer durables, financial & banking services and much more. We empower the consumers to identify the products that are safer and value for their money.