India has improved its global position and is currently ranked at 48th in the Global Innovation Index, says Dr. Sujit Banerjee Director, DST

– Entrepreneurs serve as the catalysts in the process of industrialization and economic growth of a nation, says US Diplomat Michael Rosenthal

CHANDIGARH, India, July 1, 2021 /PRNewswire/ — “For any nation to emerge as a developed economy, it is important for that nation to focus on research and innovation which can help them in designing and developing new products that have global demand,” said Michael Rosenthal, Director, US Embassy (North India). The US Diplomat was speaking during the curtain-raiser ceremony of International Innovation Conclave hosted by Chandigarh University.  The first of its kind two-months long International Innovation Conclave has been named after the Missile Man of India and former President Dr. A.P.J Abdul Kalam as a mark of respect for his contribution made in the field of Defense and Space Technology and is jointly organized by Department of Science and Technology, Government of India, and Chandigarh University. Young and budding innovators from 32 countries including the USA, U.K, Italy, India, Australia would be participating in the Dr. A.P.J Abdul Kalam International Innovation Conclave during which they would be working onto find innovative & technology-driven solutions of problems in the field of Agriculture, Health, COVID-19, Waste Management,  Water Management, Rural Development. 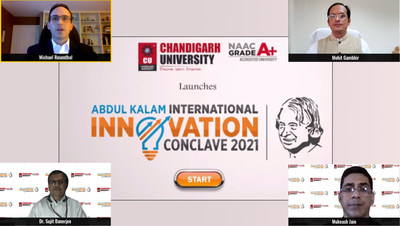 While addressing the virtual audience,  US Diplomat, Michael Rosenthal said, “Entrepreneur plays a vital role in the economic development of the country. Entrepreneurs serve as the catalysts in the process of industrialization and economic growth. Government alone cannot create an Ecosystem to encourage entrepreneurship, but it is the society and environment which leads to the emergence of new entrepreneurs in the country who can uplift the economy by investing their time and efforts in innovative ideas rather than choosing contemporary jobs in the industry.” He further added, ” The bilateral trade between India and USA has scaled to new heights and touched $ 149 billion in 2019. India is one of the Top Trading partner of USA and this has been possible only because of entrepreneurs from both the countries who have developed new products & technologies which have generated demand over a period of time.”

Dr. Sujit Banerjee, Director, Department of Science & Technology(DST), said, “Government of India is working with a mission to encourage the spirit of  innovation in the country amongst the youth and for this purpose, DST has joined hands with Universities like Chandigarh University which is a breeding ground for the next generation of entrepreneurs. The innovation lead policy adopted by the Government of India has started showing results as India for the first time has been placed amongst the top 50 innovative countries in the Global Innovation Index 2020.” India is currently ranked 48th with a jump of four positions in the Global Innovation Index.

While keeping the perspective of industry, Mukesh Jain, CTIO & Vice President Insight & Data, Capgemini India, said, “Innovation starts with an idea, which should be further encouraged to take shape of futuristic technology to become beneficial for society. Young entrepreneurs are often discouraged by seeing the failures of other entrepreneurs and we have to remove this fear of failure from their mind so that they are not afraid of taking risks.”

While giving details about the Dr. A.P.J Abdul Kalam International Innovation Conclave, Dr Sanjeet, Dean Chandigarh University, said, “Research Scholars including student and faculty from all over the world can submit their ideas online based on the themes by 5th August 2021. The initial screening and feasibility of the ideas would be completed by the experts from the industry by 25th August 2021 after which the selected students would present their final pathway to develop their ideas into real-time solutions on 3rd and 4th September 2021. Total prize money of 1.67 lakh would be given to the winners of the conclave.”

Speaking on the occasion Satnam Singh Sandhu, Chancellor Chandigarh University, said, “Chandigarh University is amongst the pioneer Higher Education institution of India which are richly contributing in the field of research and innovation. Recently, the University has been ranked first in India amongst the stand-alone Institution by the Office of Controller General of Patents, Design and Trademarks Government Of India for filing the highest number of patents (336) in a year. The University has earmarked an annual budget of Rs 5 Crore to encourage budding research scholars”.