In Lead-up to Breast Cancer Awareness Month, New Hologic Global Women’s Health Index Finds Globally Most Women Were Not Checked for Any Cancer in Past Year

Worldwide, 88% of women said in 2020 that they had not been tested for any type of cancer in the past 12 months.

Most women believe checkups help improve health, but 40% haven’t talked to a healthcare professional in the past 12 months.

WASHINGTON, Oct. 1, 2021 /PRNewswire/ — In the lead-up to Breast Cancer Awareness Month, the Hologic Global Women’s Health Index offers a glimpse into the current state of women’s health and safety, especially as it relates to preventive testing for diseases including cancer. Worldwide, only 12% of women — approximately 300 million women — said in 2020 that they have been tested for any type of cancer in the past 12 months. Breast cancer on its own ranks about eighth on the leading causes of death for women globally, and in 2020, female breast cancer was the most commonly diagnosed cancer in the world. 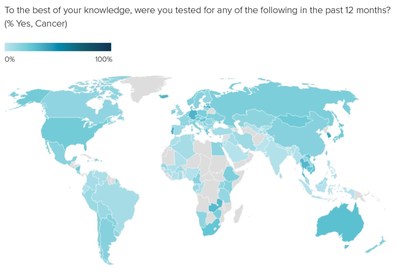 The coronavirus pandemic created significant disruptions in cancer screenings for women around the world. For example, the U.S. Centers for Disease Control and Prevention’s National Breast and Cervical Cancer Early Detection Program saw sharp declines in breast (87%) and cervical (84%) cancer screenings during April 2020 as compared with the previous five-year averages for that month. The Hologic Global Women’s Health Index found that 21% of U.S. women say they had been screened for any cancer in the past 12 months.

“The 40% of women worldwide who said they didn’t speak with a doctor or nurse about their health in 2020 is a troubling prospect. This means hundreds of millions of women potentially haven’t had the chance to express their concerns and ask questions about their bodies, much less get screened for serious and preventable diseases,” said Priscilla Standridge, Senior Research Consultant at Gallup. “It also means some women have had fewer valuable opportunities to disclose gender-based violence to a medical professional and access resources.”

The percentage of women tested for cancer was in the single digits in nearly 40 countries and territories, including the less than 1% of women who say they were tested in Pakistan, where breast cancer rates are thought to be the highest in Asia. The true figures in Pakistan are unknown, however, as is the case in many lower- and middle-income countries.

Women in South Korea are the most likely in the world to say they were tested for cancer in that period, with 38% saying they had been. Globally, no country or territory has tested more than this percentage of women for any type of cancer — and in a host of countries, the percentage is less than 10%. Yet given even the least stringent guidelines, it can be expected that 50% of women would have been screened for any type of cancer in 2020.

The Hologic Global Women’s Health Index offers the world an in-depth examination of critical markers for women’s health and safety, by country and territory, and over time. This Index provides actionable, science-backed data for improving the life expectancy and quality of life for women and girls worldwide. The inaugural Index serves as a baseline of women’s knowledge, attitudes and behaviors regarding their health to identify the keys to help women live longer, safer and healthier lives.

“Early detection, screening and diagnosis have been proven to significantly improve patient survival rates and quality of life, as well as to significantly reduce the cost and complexity of cancer treatment,” said Susan Harvey, M.D., Vice President of Global Medical Affairs at Hologic. “However, barriers to achieving higher rates of early cancer detection need to be addressed at the individual, health system and governmental level to help reduce the personal and financial burden of cancer worldwide.”

“Without being able to measure essential factors such as access to healthcare and the ability to meet basic needs, leaders cannot make the necessary investments and progress to improve women’s health, life expectancy and quality of life. Addressing even a single challenge women and girls are facing based on the priorities within countries, as highlighted within the data and report, will start to make the health and lives of women and girls better.”

African countries have some of the lowest scores when it comes to preventive care, especially with respect to screening for cancer. The Ivory Coast scored the lowest in the Preventive Care dimension of the Index, with less than 10% tested for most health conditions, including cancer. However, South Africa and Zambia both score in the top four countries for preventive care, with 25% of South African and 29% of Zambian women saying they were tested for cancer in the past year.

In Eastern Asia, about one in six women (17%) say they were tested for cancer in the past year, while 11% in South-eastern Asia said the same. These figures are even lower in Central and Southern Asia, where 7% and 3% of women, respectively, say they were tested for any cancer in the past year. However, nations such as South Korea (38%) and Japan (21%) see testing rates higher than the regional median value for Eastern Asia.

Australia and New Zealand experience some of the highest rates of preventive health testing in the world and on average 26% of women in the region say they have been tested for cancer in the past 12 months. In Australia, reported cancer screenings fall short of the 50% that would be expected if all Australian women complied with guidelines for 45- to 74-year-olds to have biannual breast cancer screenings alone — not considering that other regular cancer screenings would also be included in these responses. Slightly more than one in three Australian women (35%) in this age range report being screened for any type of cancer in the past year.

Latin America and the Caribbean

In Northern America, 20% of women say they were screened for cancer, well below the recommended guidelines for testing. Overall, 21% of U.S. women say they have been tested for cancer in the past 12 months. That figure rises slightly to 25% among those aged 40 to 74, the range in which federal guidelines recommend women be tested for breast cancer at least every two years — but it remains well below the 50% that would be expected if all adhered to the recommendation.

Gallup delivers analytics and advice to help leaders and organizations solve their most pressing problems. Combining more than 80 years of experience with its global reach, Gallup knows more about the attitudes and behaviors of employees, customers, students and citizens than any other organization in the world.

Hologic and the Global Women’s Health Index are trademarks and/or registered trademarks of Hologic, Inc., and/or its subsidiaries in the United States and/or other countries and territories.