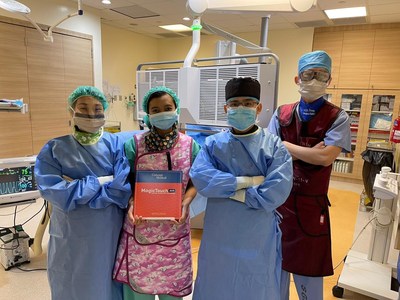 The study’s primary objective is to determine if the use of Sirolimus Coated Balloon will result in an improvement of the primary circuit patency at six months when compared head-to-head with plain balloon angioplasty (POBA). The MagicTouch AVF Sirolimus Coated Balloon has already been granted the Breakthrough Device Designation by the U.S. Food and Drug Administration (FDA). Only ESRD patients with a matured dysfunctional arterio-venous fistula (AVF) that has been in use for at least one month prior to angioplasty will be enrolled.

SGH was chosen to lead this randomised controlled trial because of its prior experience using Sirolimus Coated Balloon in two investigator-initiated pilot studies. The studies had shown that patency rates with the use of MagicTouch AVF in thrombosed arterio-venous graft (AVG) and dysfunctional AVF were 65 per cent and 82.9 per cent at six months, respectively.

An operational vascular access such as AVF or (AVG) is vital in ESRD patients for effective and long-term hemodialysis. Unfortunately, due to various reasons, the AVF or AVG may narrow (stenosis), resulting in poor flow of the vascular access, which affects hemodialysis. The functional life of an AVF is poor with as high as 50 per cent chance of failure after a median of three to seven years.

Singapore has one of the highest ESRD incident rates globally. POBA is the current standard treatment for patients with AVF stenosis. Despite the minimally invasive nature of POBA procedure, the long-term patency is poor, averaging 40 to 50 per cent at one year. This necessitates multiple procedures in order to maintain patency of the vascular access.

Paclitaxel Coated Balloon is also being used to treat dysfunctional AVF with mixed success. However, the safety concerns of Paclitaxel raised by the U.S. FDA and the issue of guidelines by the interventional societies have prompted doctors to seek a better alternative.