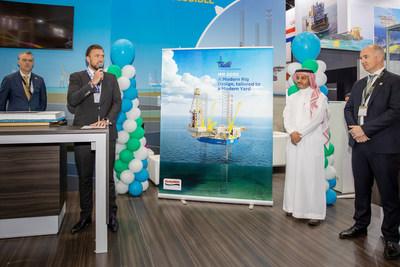 Commenting on the naming ceremony, Fathi K Al Saleem, CEO of IMI, said: “The naming of this jack-up drilling rig is a major step for IMI. The utlisation of “2030” in the name was important to the management team as it was inspired by the Kingdom’s 2030 Vision. IMI and the King Salman Complex is one of the major projects forming part of this wider strategy.”

Nils van Nood, Managing Director of GustoMSC, adds: “Contributing to the Saudi Vision 2030  is a great opportunity for us to serve key clients in Saudi Arabia and the region. Given how important the Saudi Vision 2030 is to IMI and to GustoMSC, the name was highly appropriate. We are proud of this partnership and look forward working together during the basic & detailed design phases and beyond.”

GustoMSC will tailor one of its well established CJ-series of drilling jack-ups while focussing on IMI’s modern manufacturing capabilities. It is estimated that this combination will reduce the construction time significantly.

GustoMSC acts as independent rig design company, enabling IMI and its clients to have an open approach to all major vendors that want to become part of the upcoming construction program. About one year ago ARO Drilling announced plans to order at least 20 drilling jack-ups for construction at IMI. It is anticipated that initial rig ordering will get finalized in the second half of 2020.